Yesterday, Rutgers formally announced the support staff for the men's basketball team. There were no surprises in terms of personnel hired, as each person had been linked to Rutgers in the past month.  However, now that we know everyone's specific roles, it's time to review their potential impact on the program.

Rickard played for Steve Pikiell at Stony Brook and became a graduate assistant when he finished school in 2004. He was promoted to a full-time assistant coach in 2007 and ran the offense for Pikiell ever since. To have such an experienced coach and someone with deep ties to Pikiell in a non-assistant role speaks volumes about the head coach. They obviously have a great relationship for Rickard to agree to take a lesser role at Rutgers, and he makes perfect sense to serve as senior advisor to the program.

Shoes staying with the program, albiet in a lesser role, is a win win for everyone involved. He recruited the core of the current roster, including Corey Sanders, Jonathan Laurent, Deshawn Freeman, and Shaq Doorson. He was the lead recruiter for Issa Thiam, the 6'9" wing player and 3-star recruit, who can light it behind the arc and has a lot of potential. With Rutgers still trying to close on Thiam despite his commitment during Eddie Jordan's tenure, keeping Shoes around only helps.  He has a great relationship with the current roster and will be an asset as the one remaining constant from the previous coaching regime. His role will be working with the players and he will be on the bench during games. Although he can no longer actively recruit in this role, his contacts and relationships will undoubtedly help the current staff in rebuilding the roster for the future.

Asher was Director of Basketball Operations last season at Siena and served as an graduate assistant at N.C. State the two seasons before.  He is young and hungry to contribute to the program, and Pikiell obviously sees potential in Asher.  It also doesn't hurt that he was at N.C. State for the freshman season of brothers Caleb and Cody Martin. The twins are transferring from the ACC school and are considering Rutgers as a landing spot. Asher's connection to them can only help, as scoring the brothers would be a big get for the future of the program.

Dougher is a legend at Scotch Plains-Fanwood high school, where he led them to a state title in 2008.  He played for Pikiell at Stony Brook and left as the program's all-time leading scorer.  He was a major reason why Pikiell was able to turn Stony Brook into a perennial conference champion contender.  He served in the same role at Stony Brook the past two season that he will serve at Rutgers.  Not only is he another staff member with close ties to the head coach, but his reputation and relationships in the state will be valuable to the program as well.

I reviewed the coaching staff here, and there is no question Steve Pikiell did an amazing job assembling such a seasoned team for his bench. He did the same with his support staff, as he has two veteran assistants with Rickard and Vetrone serving in support roles. Add in Dougher and his New Jersey ties along with Asher as an up and coming staff member, and you have to be impressed with what Pikiell has done.  Without any research, I think it's safe to say this is the most veteran group of personnel that the Rutgers men's basketball program has ever had, and it's probably not even close. They will need every ounce of experience, knowledge, and determination that each of them have in order to restore credibility to the program.

With Pikiell's "get better every day" mantra, he has the people around him, both close to him and others that bring valuable expertise, to help deliver on that philosophy. It's going to take time, but have confidence that the right staff is in place to begin the dig out from the underground and lead the program to daylight. 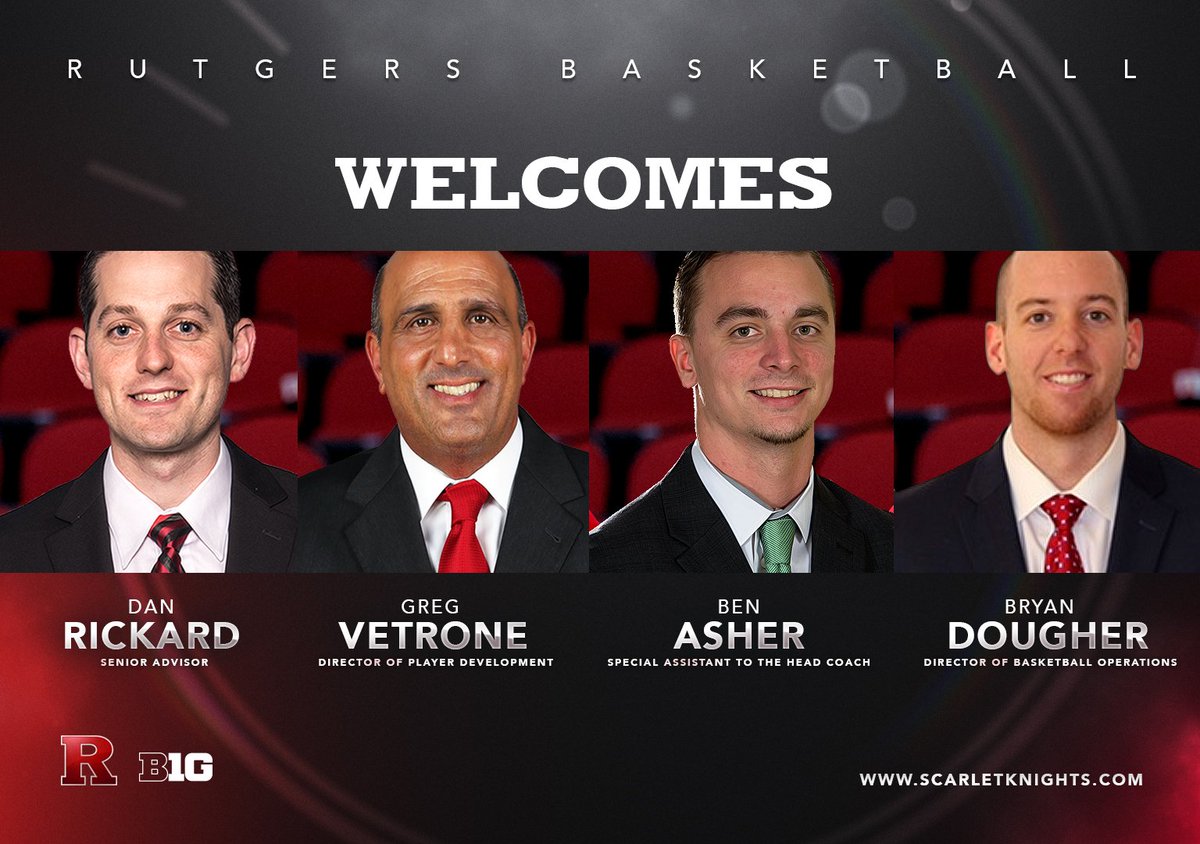