The Knight's Charge is a storied, formidable offensive maneuver. Incredible to behold and nearly unstoppable when executed with precision, the charge could be devastating to enemy tactics and morale. However, if the charge broke, the loss of momentum and critical advantage could easily lead to ruin. Let's take a look at the moment the Scarlet Knights of Rutgers executed their own cavalry charge and turned the tide of the battle, for better or worse.

Share All sharing options for: Knight's Charge: Nova & James Break Through the Line

The unthinkable was happening.

Rutgers was losing to Howard, 7-3. The crowd was dead. The Knights had gone three drives with only a field goal to show for it. Paul James had just been stuffed at the line and then had to fight tooth and nail to scratch out five yards and get the Knights into 3rd and 5 on their own 31-yard line. A first down, let alone a touchdown, was no sure thing. 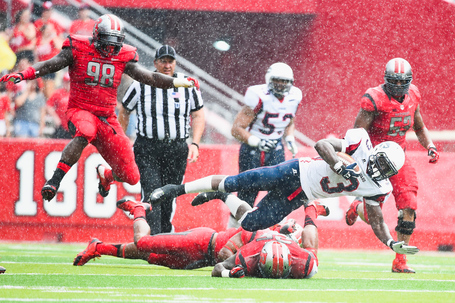 The Knights had come out flat. Maybe it was the thousand miles of journeying the week before. Maybe players were looking forward to the big game the following week. Whatever the reason, the Howard team came out playing with intensity, with discipline, with a ferocity that caught the Knights off-guard.

In that moment, the company could have folded. The 100-degree, 85% humidity at field level could have wilted the resolve of the exhausted combatants. It could have been 2004 New Hampshire all over again. It could have snowballed into an epic collapse and a deflating loss, sucking the excitement out of the upcoming game against the team from Pennsylvania.

In that moment, offensive strategist Ralph Friedgen called for a high-risk, high-reward play that proved to be a turning point in the conflict. 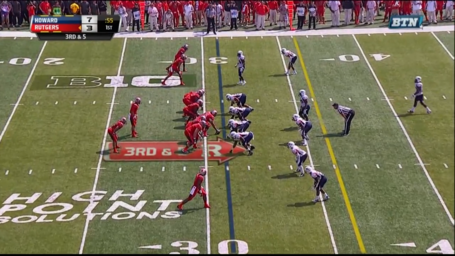 Facing a base 4-3 defense with a single safety deep and linebackers showing blitz, the offense sets up in a classic shotgun formation, RB Paul James and WR Leonte Caroo to the right, on the weakside. TE Tyler Kroft lines up to the left, on the strong side.

At the snap, Howard brings a formidable blitz, sending both the weakside and middle linebackers, with Kroft pulling the deep safety in man coverage across to the strong side. The offensive line also pulls to the strong side, moving the entire defense away from James, who slips out into the flat. 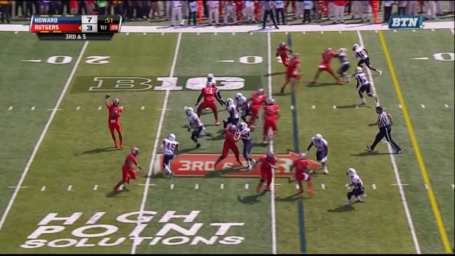 Gary Nova deftly retreats in the face of the oncoming blitz, lofting a perfect pass to James, allowing him to catch the ball in stride, pulling his momentum outside the trailing linebacker and corner. Great setup, but this play goes for a loss unless James can win the footrace to the corner. 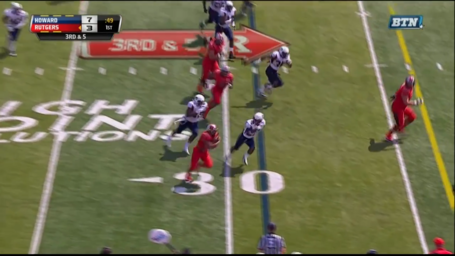 What we don't realize - and what the Howard defense is now keenly aware of - is that James is fast. Really fast. Kicking into a second gear, he accelerates away from the two tacklers and he...is...gone.

Touchdown Rutgers and the rout is on. While Howard put up a good effort, there was no looking back from this point. The Nova to James' connection deflated the defense and highlighted the versatility of one of the nation's top offensive weapons. For the rest of the game, the Bison defense has to respect the inside run, the deep ball, and passes in the flat to James and talented fullback Michael Burton. Stretched beyond its limits, the Knights drop 31 unanswered points on Howard before letting up in the second half.

If this play doesn't work, who knows what happens. Momentum is a funny thing in football and this play turned the tide in what was a critical victory for the 2014 Scarlet Knights.

Next up: An epic showdown with our hated rivals to the west. After we celebrate one of the biggest wins in program history, we'll break down the moment where the Knight's Charge turned the tide. 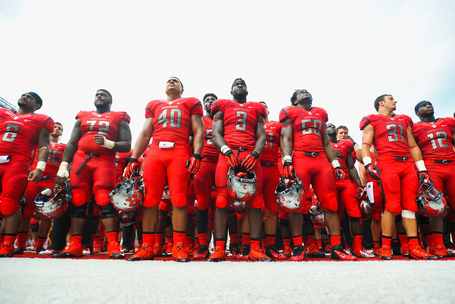