Bring on the crowds: The Big Ten draws well....in some places

The expectation is that Rutgers will be drawing big - and bigger - crowds now that they're in the Big Ten. But how do our fellow conference schools do? And what can we expect on Saturday against Howard.

Share All sharing options for: Bring on the crowds: The Big Ten draws well....in some places

Last Saturday, Akron and Howard drew 9,104 people to the Zips' InfoCision Stadium. It was a sunny day, 69 degrees at kickoff.  And they drew less than 10,000.  And for the record, last year Akron drew an average of just over 17,850 against the likes of Ball State, Kent State, and Toledo.  Also for the record, I expect the Rutgers-Howard game to draw a tad better than that.

And it had better.  After all, we are a B1G team, and we should be drawing well, regardless of the opposition.  Right?

Well, a look at the first week's home attendance for the Big Ten showed some interesting if not predictable attendance numbers.  The usual suspects drew ridiculous crowds.  Michigan, Michigan State, and Nebraska each drew capacity - or even larger - crowds.  See what playing App State can do for your attendance? 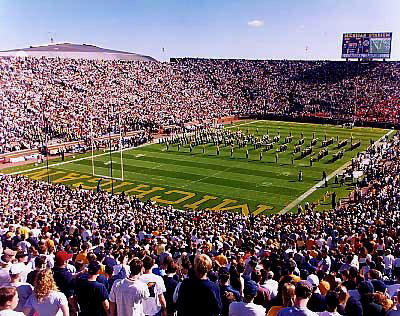 But there were others that showed being a B1G team doesn't automatically mean big crowds.  Of the ten true home games (no neutral sites), four had less than 75% capacity.  Significant?  Maybe.  Last year, a season that spiraled downward, the Knights still drew an average of over 46,000 per game.  That was just under 89% capacity.  So in comparison to the rest of the conference, Rutgers' overall attendance isn't so bad.  Based on last year's figures, Rutgers would have been the 10th highest drawing team.

Rutgers has not announced what the expected crowd might be for the home opener.  My feelings?  It better be a really good showing. Students are back on campus, but I figured they'd be there anyway. So let's see everyone else there; I'm really not interested in being compared to Purdue and Illinois.

And for those who are looking for something for free: The first 10,000 fans will receive a 2014 Rutgers Football schedule magnet courtesy of The Rutgers Business School. Cool!