Conference play is on, and the Women's Soccer team is going toe-to-toe with the B1G's best. And we're showing we can hold our own across the board.

Welcome to the world of Big Ten sports, non-football version.  Long weekends on the road and playing some of the top teams in the nation.  Every week.

It was after the Nebraska game on September 25, a 1-1 tie, that Women's Soccer Coach Mike O'Neill commented (my emphasis), "We worked very hard, considering it was a short crazy week with being off Monday, training Tuesday and hopping on a plane Wednesday." Playing UConn or St. John's or even Pitt seldom, if ever, meant going to Newark Liberty first.  And after that Nebraska game, the women didn't return home, as they headed north to take on Iowa before coming back to New Jersey.  Such is life in the new world of Olympic sports at RU.

The men's soccer team faced its second nationally ranked Big Ten opponent, playing to a 0-0 tie with No. 16 Michigan State. Michigan State has only allowed one goal all season.  Sophomore David Greczek played the second half and both overtimes in goal for the Knights.  He made two early stops on shots by MSU leading scorer Jason Stacy, preserving the shutout.

A win and a tie, both in conference, saw the Knights raise their season record to seven wins and be in fifth place in the conference.  The 1-1 draw at Nebraska was the first for Rutgers since last year's NCAA Tournament at No. 7 West Virginia. Junior Brianne Reed scored the lone RU goal, her first of the season.  Against No. RV/13 Iowa, the No. 25/17 Scarlet Knights got on the board in the early minutes of the second half, as Madison Tiernan struck the ball from the 18 into the far corner for her third-career game-winner. Senior Amy Pietrangelo recorded the assist on the play. Both she and Tiernan are tied for the team-lead with eight points (3G, 2A).  Freshman goalkeeper Casey Murphy recorded her fifth shutout of the season to improve to 7-1-1.

Field hockey in the Big Ten is big time.  Through last week, there were seven B1G teams, including RU (No. 17) at the time, in the Top 25.  Michigan State was at No. 26.So it's a tough row to hoe for the Knights.   Rutgers dropped a 1-0 OT decision to No. 13 Northeastern, then traveled to Ann Arbor where they lost 2-1 to No. 14 Michigan.  Against the Wolverines, RU pressured the opposition for three straight penalty corners, scoring on the third as senior captain Sophie Wright (4th G) put the ball into the back of the cage to tie the game.  Alyssa Bull recorded her second assist of the year on the goal.

If Field Hockey is tough, Volleyball made be tougher in the Big Ten.  There are six Top 25 teams from the conference.  Rutgers faced one of them, along with another that received votes, dropping both contest.  The Knights lost to Northwestern 3-0 before losing to No. 16 Illinois 3-0. 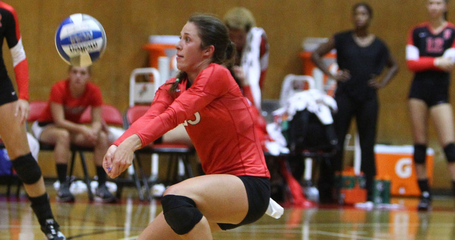 Men: Last week for his play the week prior  Senior Jacob Stockl was named the Big Ten Conference Co-Golfer of the Week. Stockl earned the honor after carding a six-under par 207 (66-69-72) to place second at the Rutgers Invitational. The Knights are finishing up play at the Badger Invitational in Wisconsin. 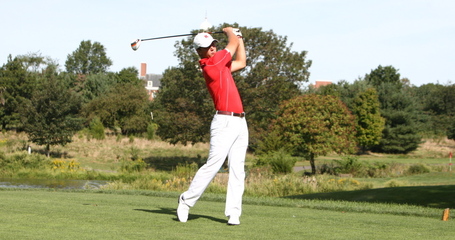 Women: Rutgers women combined for a 920 (308-309-303) total and finished seventh out of 17 teams at the Yale Women's Fall Intercollegiate. Sophomore Taylor Clark led the Scarlet Knights' effort all weekend with a 75-75-74 to finish with an 11-over-par 224, tied for sixth individually. Clark finished 10 strokes behind champion Elisabeth Bernabe of Yale.

If you can't get to a home contest, many are broadcast - and rebroadcast - on RVision, BTN or BTN Plus

Coming up at home