What are we thinking on the eve of the Green Wave's arrival?

Just one more non-conference game before Rutgers really dives into the heart of the Big Ten. The Scarlet Knights passed the hangover test in Annapolis last week, and now they have the trap game test this Saturday. It's the first time RU opens as the favorite since week two against Howard, and Rutgers has a tendency to play up and down to competition. What do we think about this matchup?

Dave White: WHYYYYYYYYYYYYYY HASN'T BASKETBALL PRACTICE STARTED YET SO I CAN START TO WRITE PREVIEWS ABOUT THE TEAM AND THE PLAYERS AND THEIR CHANCES IN THE BIG TEN. MYLES MACK IS A SENIOR SO IT KADEEM JACK AND I AM TIRED OF SEPTEMBER AND CANNOT WAIT FOR THE COLLEGE HOOPS HYPE TO BEGIN.  *deep breath*  Rutgers 44 Tulane 28

Garrett Stepien: Listen to me when I tell you that everyone that is enrolled at Rutgers is already talking about the Michigan game -- Tulane student tickets are more than plentiful with less than 48 hours till kickoff, and kids who have claimed their's are literally just giving them away -- and if they'll be able to claim their prized ticket in the Scarlet Lottery.

With that being said, Scarlet Nation better hope that the football players aren't amongst that consensus of people looking forward to the annual blackout game slated for a primetime showing on the Big Ten Network. If there's anything that Rutgers should've taken away from their escape at Navy, its that it has to keep the foot on the throat. The defense made the necessary adjustments to contain an always dangerous triple-option attack that is always amongst the top rushing attacks in the nation.

Tulane enters this game as the clear underdog and a team that the Knights should put away early and often. The Green Wave are reeling off a 47-13 drubbing at Duke to drop them to 1-3 on the season, and their spotty defense -- ranked 108th in FBS in total defense with 35.8 points per game -- should be a feeding ground for Gary Nova & Co. to take another step of progression before setting up another rowdy atmosphere at High Point Solutions Stadium.

I think the offensive line dominates this one, giving Nova more than enough time to connect with guys like Leonte Carroo and the Andre Patton, who's finally making his return to the gridiron. Expect the hogs up front to open up those same gigantic holes for Justin Goodwin and Desmon Peoples to glide through that they did last week. And if I'm defensive coordinator Joe Rossi, I'm challenging my team to keep Tulane to under 20 points. Rutgers 38, Tulane 17

Bob Cancro: You done, Garrett? Just want to make sure I'm not cutting you off (just kidding). Ok, seems that no one will be there. That sucks. For a lot of reasons, but I'll hold that til next week's attendance piece when I go apeshit and explain why we suck as fans. That being said, it should be a low key but pressuring game on both sides of the ball. Do what you do best and let the beasts up front on O and D do their jobs. Rutgers 34 Tulane 10

Kevin Recio: I'll be at the stadium, if not to cheer them at #TheBirthplace then because there aren't any good games at noon (or 3:30 PM for that matter). There really isn't any indication that Tulane should win this game, so if Rutgers coughs up a loss it's a serious upset. The offensive line should open up wide holes, and the defensive line should have to pay rent for living in the backfield. Can Nova have a second straight game without a turnover? Rutgers 34, Tulane 17. P.S. It's great to hear that Michigan is as hot a ticket as ttfp.

Andy Egan: Who doesn't like kegs and eggs tailgating? C'mon people (and students) we only get six of these this year. I'm excited to see our running game, version 2.0 (beta test). I also want to see a clean game with good decisions from Senor Nova. Finally, pressure.  Rutgers is again one of the best sack teams in the country (thank you, Coach Rossi, for bringing us back where we belong on D) and I want to see more of the Kemoko Dragon unleash the beast. I am also waiting for Tyler Kroft to get it in gear this game for a big TD. Rutgers takes care of business, Knights 31, Tulane 17.

Ray Ransom: You guys are all good sports. I want blood. I want complete and utter domination. I want a shutout and I want Hamilton and Milewski and Longa and Snyder and that awesome front seven to live in the backfield and hold these fools to negative rushing yards. I want an offensive explosion where Goodwin and Peoples rush for 100 yards+ 2 TDs each, while Burton and Nova rush for 50+ yards 1 TD each. Most importantly, I don't want any turnovers. I want SuperNova. I want R Block Party. I want vengeance. 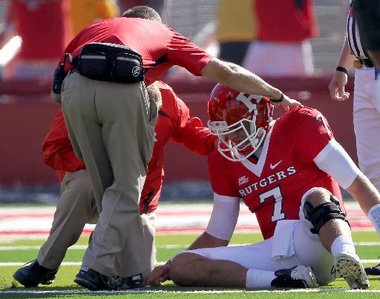