The Knight's Charge is a storied, formidable offensive maneuver. Incredible to behold and nearly unstoppable when executed with precision, the charge could be devastating to enemy tactics and morale. However, if the charge broke, the loss of momentum and critical advantage could easily lead to ruin. Let's take a look at the moment the Scarlet Knights of Rutgers executed their own cavalry charge and turned the tide of the battle, for better or worse.

Share All sharing options for: Knight's Charge: 4th and 2

The predictions were spot on. The nay-sayers were right. Rutgers came into the contest vs. Navy as underdogs and for good reason.

Reeling from a hard-fought, emotional defeat at the hands of the rival Nittany Lions, Rutgers had come out flat and was fighting to keep control.

Attempting to steal a win away from Navy's home turf - something no team has done in 2 seasons - Rutgers was down 7-0 after an ill-timed and uncharacteristic fumble by star running back Paul James on the opening drive. Navy, a team known for punishing teams off of turnovers was true to form. Three hard runs from Navy's myriad option attack resulted in a touchdown before the Knights could settle into their 4-2-2-3 front. 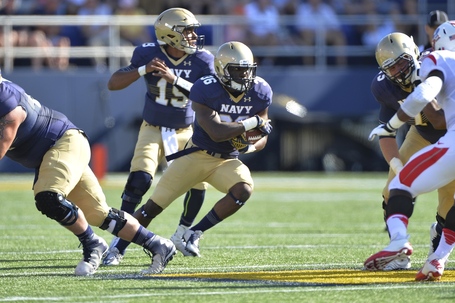 With the clock winding down on the first quarter and both teams trading body blows, Rutgers found itself facing 4th and 2 from the Navy 38. Too close to punt, too far to safely kick a field goal. Kyle Flood is faced with perhaps the most important decision of the game.

Score here and that critical momentum is back in your favor. Turn the ball over and the Navy offense gets back to grinding away, building upon their already buoyed momentum. This is a critical moment for Coaches Flood and Friedgen; quite likely the moment that defines the outcome of the game.

After briefly conferring, the offensive unit takes the field, deployed in a heavy run formation. 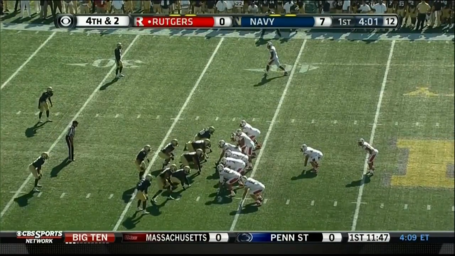 One-wide, double-tight end, heavy backfield. Look at how the linemen are set. Low, aggressive, leaning forward. Nobody is getting ready to kick-block out. They're preparing to fire out of their stance and impose the collective will of the Knights upon their opponents. This is a message to the defense.

We are running the ball. Try and stop us. 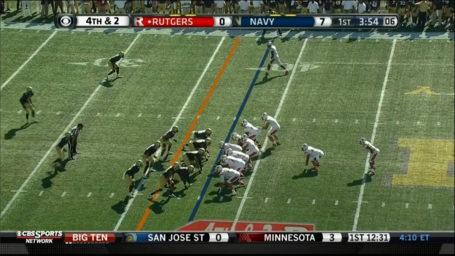 Pre-snap, Nova makes two reads, calling out the Mike linebacker and what appears to be another backer coming on an inside blitz. He sends one tight end in motion to an absolutely stacked strong side.

The message is clearer.

At the snap, Paul James takes the handoff and follows fullback Michael Burton around the right side. The offensive line does a good job against a strong Navy push up the middle. The Navy defense gives maximum effort and the blitz arrives en force. The line of scrimmage remains where it started. If James doesn't get around the corner, the play is stopped for a loss. 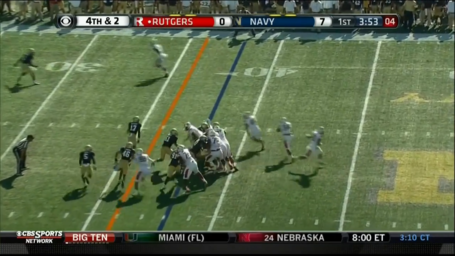 This is it. This is what it all comes down to. Nova did his job. The O-Line did enough to make the play happen. Carroo's push downfield has pulled the corner into deep cover territory. It's up to Burton to set the edge and James to break into the open field for the first down...and hopefully more.

Burton absolutely demolishes the safety coming up in run support AND takes out the trailing linebacker, opening up a huge hole that James explodes through. A juke, a broken tackle and a blistering 40-yard dash later, Paul James is in the end zone. The Scarlet Knights would never look back.

While it would be James' last touchdown of the season, it was an important one. With a brutal slate of conference games on the horizon, almost any scenario where the Knights become bowl eligible includes a win at Navy. While the team payed a heavy price in the loss of their best offensive threat, the Knights earned a critical victory in the 2014 campaign and moves on to face Tulane with the opportunity to go undefeated in non-conference play and get revenge for the homecoming debacle of 2010. 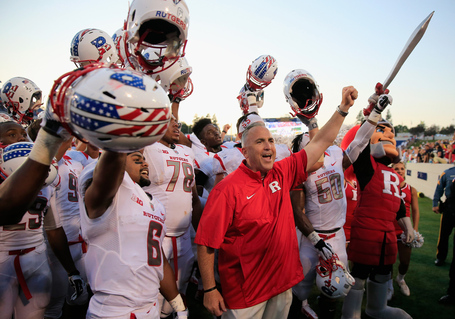