A great week for Women's Soccer highlights the past week of play.

The loss to No. 14 Indiana dropped the Knights below .500 for the season, and evened their B1G record at 1-1.  Freshman Niel Guzman scored one in the 40th minute of play, tying the game, coming off a rebound from freshman Jason Wright. The assist was the second of the season for Wright. Sophomore goalkeeper David Greczek made seven saves on the night, including a diving penalty kick save in the first half with the game still scoreless.  Earlier in the week, Rutgers dropped a 3-0 match to intrastate rival Monmouth.

Two wins over the state of Michigan put the Knights in the thick of the Big Ten soccer race. Sunday's win over No. 21 Michigan was a statement for the women.  The Knights held the Wolverines (7-3-0, 3-1 Big Ten) without a shot on goal in the 1-0 win. Stef Scholz crossed a ball to set Jessica Puchalski for the lone - and winning - goal.   Against Michigan State, junior Sam Valliant tallied the lone goal and goalkeeper Casey Murphy made four saves.

The Big Ten era and season started off with a 3-0 loss to Iowa.  The B1G is a strong Field Hockey conference, and Iowa was a solid test to measure the Knights' position.  In the game, Goalkeeper Shevaunn Hayes made eight saves in the loss.  Iowa put 12 shots on net 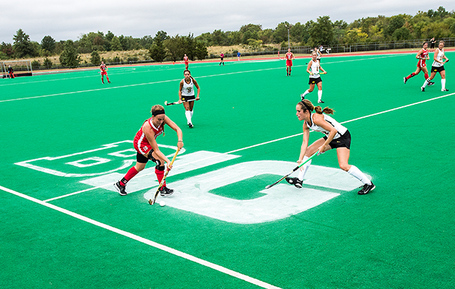 Hosting the Rutgers Invitatyional, the Knights went 2-2 on the weekend.  They opened its home slate Friday splitting the first day of the tournament 1-1, defeating Akron (3-1) in its home opener and falling to American (1-3) in its second match.  Against Akron, junior libero Ali Schroeter posted 21 digs and another 25 against JMU.  The tournament concluded with a 3-2 loss to JMU and a 3-0 win over Princeton.  Sophomore middle Lauren Cloyd was named to the All-Tournament Team following her performance over the weekend. Cloyd registered a total of 20 digs, 14 blocks and eight digs across four games.  Against JMU junior Ronnie Komisarek had a season-high 23 digs.  Against PU Junior middle Eden Frazier and Fletcher tied for the team lead with 12 kills. Senior setter Nicole Bayer posted a season-high 40 assists in the sweep.

Men's golf hosted the Rutgers Invitational, with the Knights coming in second in the 18-team tournament.  Rutgers senior Jacob Stockl had a strong showing for all three rounds, finishing second on the leaderboard with a six-under 207 (66-69-72).  He was the defending tournament champion.  Juniors Jonathan Chang and Louis Bodine each had a solid performance.  Chang finished tied for 11th with a 214 (70-74-70) while Bodine carded a 216 (75-69-72) to finish tied for 14th.

Senior Jacob Stockl has been named the Big Ten Conference Co-Golfer of the Week. Stockl earned the honor after carding six-under par 207 (66-69-72) to place second at the 95-competitor Rutgers Invitational, played Sept. 19-20 at the par 71, 6,347-yard Rutgers University Golf Course.

Women: Finished third of nine teams at the Monmouth Invitational.  Individually, a fourth place finish was tops for the Knights  by senior Paige Senatore and RU had three other top 25 finishers. Senatore finished in a time of 18:44.0, with Brianna Deming in 13th (18:58.2), freshman Megan Coakley in 23rd (19:41.4) and senior Allison Payenski in 24th (19:42.0).

Men: Finished last among eight teams at the Monmouth event.  The Scarlet Knights were led by junior Jaimin Vekaria (Clinton, N.J.) who finished in 42nd in a time of 27:53.9.

If you can't get to a home contest, many are broadcast - and rebroadcast - on RVision, BTN or BTN Plus

This week, all Olympic sports are on the road.  The only sport at home this week is football.  Will you be there?