The OtB staff discuss some of the highs and lows of last night's game.

After all the hype, I think it's fair to say that the game lived up to its primetime billing. It was a nailbiter from start to finish, and although the outcome wasn't what we wanted, the atmosphere was rocking, and the national college football audience got to see what CHOP Nation is capable of. Here's the best and worst from Rutgers-Penn State:

Accolades: 3 players who got it done

Kevin Recio: Darius Hamilton was a force all night. This was the defense we've all wanted to see: an aggressive scheme that can give even the best quarterbacks fits in the pocket. Kevin Snyder also had a great game, possibly amped up especially from showing up his home state program. Those two combined for three sacks that really put Hack in tough passing situations. I'll give my third helmet sticker to Leonte Carroo. Carroo continues to be the most consistent target for Nova despite getting plenty of attention from opposing defenses. Oh, and he had a blocked punt.

Bob Cancro: Hamilton and the entire defensive front.  Milewski's big paw knocking down a pass (hey, did UCF do that?)  Hack had pressure like he hadn't seen thus far this year.  Hate to play the "me, too" card, but Caroo continues to be consistent and the offense's go-to guy.  And special teams (blocks) were outstanding.

Dave White: Darius Hamilton really stuck out to me.  He was finally getting behind the line of scrimmage and disrupting.  In fact, the entire defense did their job and just got worn out at the end.

Ray Ransom: Hard to argue here. Great play from our front seven and Hamilton, Snyder and Milewski had outstanding games. I think we need to share the love with the secondary. Yeah, Hack racked up 300 yards, but only allowing 13 points when being backed up with 5 INTs is an exceptional performance. This unit has been getting better every week and by end of season could be a strength of the team.

Demerits: 3 players who can do better

KR: Disappointed with Joey Roth's lack of distance on his punting. For the punter who is supposed to have the stronger leg, a 36.2 yard average isn't a great night. Gary Nova just had an atrocious second half. The first half went pretty well despite three picks, but all of his interceptions were arguably the fault of his receivers (either timing or a tipped pass). Once they came back from the break, however, the offense just completely stopped being a competent unit, and Nova struggled once again with decision making.

BC: I do find a lot of fault with Nova.  He had a decent first half, as Kevin writes, but his meltdown in the second half was a killer.  He only had to be adequate and make a couple (maybe only one) decent throw in the half to lock up the game for the Knights.  As stated, the punting was barely adequate and how, Mr. Federico, do you open the game with a kick out of bounds?

DW: I'm not going to pick on players.  I actually had a problem with Fridge.  It was clear that Nova didn't have it, and yet Fridge kept forcing it in the 2nd half.  Paul James is the kind of back who can wear down a defense and then break one, but it never felt like they went to him enough.  I think Fridge may have fallen in love with trying to find the knockout punch and instead, put too much on Gary's shoulders.

RR: I've been a Gary Nova supporter for a long time, but at some point, you need to realize what kind of player you have on your hands. If he really is the best we have going forward, this offense needs to fundamentally change into a grind-it-out, lean on the defense, wear 'em out by the end of the game kind of offense. So, I think Gary has to shoulder some of the blame, but the coaching staff is also culpable. It's hard to fault a guy like Paul James in a game like this, but if we ever needed a hero, this was the game.

KR: Have to give credit to Joe Rossi for having his defense ready to play. The defensive line was disruptive, and Kevin Snyder was able to penetrate the Penn State line on some nice blitz plays. Also, Nova's final interception play wasn't that bad of a call. Every time I watch the replay, Carroo looks like he's in for a touchdown if Gary can just lead him a bit more.

BC: God bless the defense.  There were blitzes and hard rushes off the edge.  And special teams on blocks were monstrous.

DW: Nearly every 3rd down play for the defense.  Showing 7.  Then only rushing 3.  It kept Hackenberg off kilter for most of the game.

RR: I'll have to go back to the tape, but I thought the screen game worked well. With an aggressive defense charging into the backfield, James picked up 13 on a great play and backed the defense off. A few more of those could have opened things up for the run game, which was not where we needed it to be.

KR: I thought it was odd that Paul James wasn't used as much in the running game. 14 touches seems like a little underused, especially considering 10 more maybe would have prevented a Nova interception.

BC:  I think Fridge did well, over all, although the run (short pass?) game disappeared, but let's give credit to the PSU defense.  There were a good number of On the Banks commenters - some from PSU - who forgave Nova and blamed Fridge.  The plays still are in the hands of the player, and I feel Nova missed throws and simply airmailed passes - even the ones that were caught.  He hung out a few receivers to get clobbered after the catch.  And the final desperation series where he ran five yards beyond the line of scrimmage before passing?  He's a senior -- five yards?

DW: The lack of Paul James in the 2nd half.

RR: Going deep right after the key interception. I love the idea of trying to use that momentum to slingshot into the lead, but with a QB as erratic as Nova, put it in the hands of James and grind it out. Yeah, 3 yards ain't good at first, but those 3 yard runs start wearing on a defense and with a dynamic back like James, it's just a matter of time...

KR: The game was tight the entire night, and I I'd be lying if I said I was confident Rutgers would win even with a 10-0 lead. Having said that, I did my best to soak up the atmosphere of Big Ten football in Piscataway, NJ. From the pageantry perspective, it lived up to my admittedly high expectations. 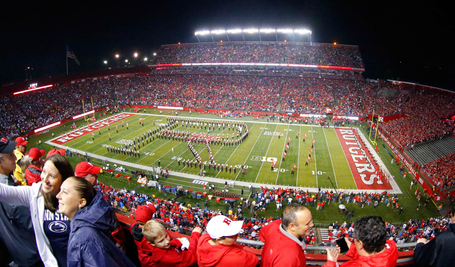 BC:  What a game, what a night.  The energy was phenomenal, better than Louisville '06.  The crowd learned - I hope they learned - what B1G football is all about and what they need to do.  Students?  Great job, but can you stop chanting during the Alma Mater? Puleeeze!  And there were not as many ttfp fans as I thought there would be.  Which means RU fans bought and kept their tickets.  Good for all of you - keep that thought forever.  And I don't think the ttfp fans should buy tickets for the B1G championship game just yet.  Just sayin'.  And most of all, yes, Big Ten, we're here.  Thank you!

DW: I didn't attend the game, but you could feel the atmosphere through the TV.  Seemed like Rutgers put on a show for the Big Ten and it was apparent.  In other news, for a night that--despite being a loss--was mostly celebratory AND me being a pro-media and pro-Star Ledger guy, I really felt this column by Sports Boss Kevin Manahan was unfair and trying to make too much out of nothing.  I probably shouldn't even link to it, but you can decide to click if you want.  But, like it or not, most people thought that despite the loss RU earned their Big Ten stripes last night.  Manahan doesn't seem to want to believe that yet.  While some may have taken the comments made (or not made) by Penn State coaches and players and used it to write about adding to the rivalry, Manahan used it to trash Rutgers.  On Rutgers biggest night, this was not the time for this column--yet Manahan couldn't resist.

Also, students--you did a great job last night.  Really you did, you were there early and you were loud, but can we try... just try to be a little bit clever?  Yell "F*** PSU" or whatever team is being played lowers you and your university.  Look to Duke's Cameron Crazies.. They're clever.  Clever is going to take a player out of his game over flat out cursing (stuff they hear all the time) every day.  Let's just think about it, ok?  I know it was an 8 pm day and you had all day to, um, prepare, but let's be even better next time.

RR: On the surface, I though Rutgers was going to pull out a close victory, but secretly I just wanted a good game. We We didn't need to win this one. We can find 6 wins on the schedule and go grab another Pinstripe bowl berth. We just needed to be respectable when the entire nation was watching...and we were. We absolutely were. The team was fired up and brought some serious heat. The fans were amazing and the energy level was through the roof. The bravado and excitement leading up to the game was exactly what we've been waiting for for so many years. This was our arrival to big time college football and we did everything we needed to show the college football that Rutgers is Big Time College Football. We can ball with the big dogs and you better believe the rest of the Big Ten is taking notice of our awesome Scarlet Knights.