Rutgers football: 48,040 at the Howard game, many dressed as empty seats

So, I was wondering if they counted people actually walking through the gate or just used ticket sales. Based on the Howard game, it's the latter.

Share All sharing options for: Rutgers football: 48,040 at the Howard game, many dressed as empty seats

Sorry.  There were not 48,040 people at the Rutgers-Howard game.  There were huge areas that were empty.  It would mean that there were only about 4400 empty seats in the stadium.  I think not. 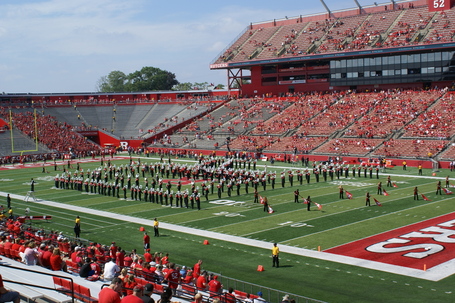 This photo is about ten minutes before kickoff.  A late arriving crowd?  Very!

That aside, I'll give props to the students, who were in the house at kickoff.  Although they were long gone when the final seconds ticked off the clock.  But they get a mulligan; it was brutally hot and they did their part.  And overall, the crowd seemed....hmm....quiet?  bored?  unimpressed?  nervous?  Not very large. Needless to say, the numbers will not be in question this coming week as ttfp comes to town.  And didn't you love it when Joe Nolan, the PA announcer actually referred to them as "that team from Pennsylvania"?  It was great.  And, yes, Nolan is the traffic guy with Scott Shannon on WCBS-FM in the morning.

And while I'm giving a thumbs up to the students, it seems the issue of student attendance at college football games is becoming an issue at even the biggest of the Power 5.  When Nick Saban has to plead for Alabama students - Alabama! - to come out to games and to stay until the end, we may have some problems.  A recent Wall Street Journal article discussed some of those issues, including students being priced out, wanting to take the easy way by watching on TV (or their phone or other mobile device) or just having other options.  And Bleacher Report also documented the problem.  It's no wonder that athletic departments, including Rutgers, are trying to find ways to get students out to games and to keep them out for the whole game.

Just for the heck of it - random Big 12 Attendance

The Big 12 is a well established conference, despite it almost disappearing a few years ago.  It surprised me to see the relatively small stadiums that exist in the conference.  In week 2, they also played lesser opponents with mixed results on attendance.  In this sample, there was one conference game at Iowa State.

Some of the match ups weren't real exciting. Western Kentucky at Illinois.  Ball State at Iowa (although the Hawkeyes had to put up 14 in the last period to win).  McNeese State at Nebraska, yet another nail-biter for the B1G. And the attendance in some places showed the lack of star power in the pairing.  Then, of course, there were the B1G Boys packing'em in to watch quality opponents thump them.  But, thank you, Buckeyes, for adding to the overall total of Big Ten home attendance of 1.23 million.  After just two weeks.