Dickie V not a fan of Rutgers in the B1G

Share All sharing options for: Dickie V not a fan of Rutgers in the B1G

He's a Jersey guy.  Born here, got his start coaching high school here.  He was hired as a Rutgers assistant and likely would still be at Rutgers if he had the opportunity (another thank you to Fred Gruninger):

Dick Vitale told me yesterday: "If Fred Gruninger had hired me in 1973, you'd be calling me today about my retirement from Rutgers."

But that didn't happen and Dickie V left to coach the University of Detroit, and coach it pretty well (I will admit I was surprised at the success):

His next move to coach the Detroit Pistons was a flop, he moved to ESPN, and.....you know the rest.

But recently Dick had some things to say about Rutgers and the big Ten:

Just wondering as I just ran into some super guys that love Rutgers - They agreed that RUTGERS does not belong in the Big 10!

And that generated some feedback from Rutgers fans:

@DickieV Rutgers fans are devastated to hear this!

After seeing this, I've never felt more sure that Rutgers belonged in the Big Ten RT @DickieV RUTGERS does not belong in the Big 10!

@DickieV what was the purpose of this tweet? Clearly to get a reaction (attention whore) or to upset Rutgers fans for no good reason

Okay, I will admit that I am not a Vitale fan.  I feel he's kind of gone past his time, maybe a little like Lee Corso in football (though I still like Corso).  To me, Dickie V is an ACC/Duke apologist/promoter/sycophant, as illustrated by this flowchart that was created by a Reddit contributor: 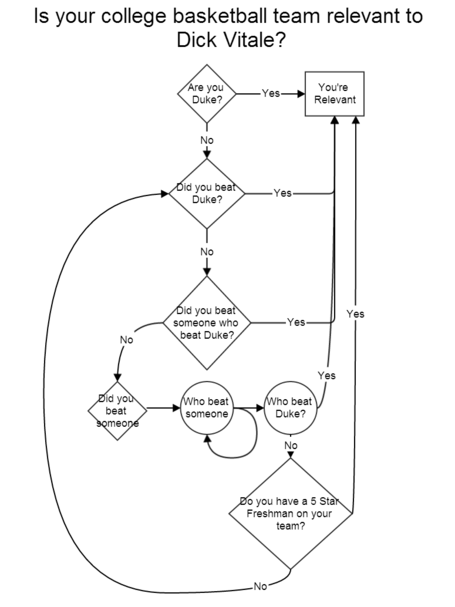 But give him his due.  He is not a bad guy.  In fact, I believe that he is a humanitarian and is very sincere when he talks about his favorite causes, about the V Foundation, and about helping others.  In fact, he helped Rutgers Basketball not too long ago.

Mr Emmert - the fans on twitter feel -Kerwin Okoro Rutgers has been given a bad deal by NCAA-Mark do u hear me-he lost his Dad & brother.

So, is it just me or is Dick Vitale way off base on the RU/B1G thing and does he sort of have it in for his former Garden State employer?  Just wonderin'.