Rutgers Football: You've got your tix for football....now use them!

Suddenly Rutgers football is a hot ticket. No, it isn't Notre Dame or Texas, but the secondary market has some good prices for those with tickets to sell. Don't do it!

Share All sharing options for: Rutgers Football: You've got your tix for football....now use them!

I know I can't stop you from selling your tickets.  Neither can Rutgers.  And to a degree, Rutgers doesn't want you to keep those extras ducats.  Dynamic pricing depends on resales on the secondary market to raise prices for the home team.  But you do realize (please say that you do understand) that there are people out there buying Rutgers football tickets who (gasp!) will be rooting for the other team! (cue ominous music)

I bought a mini plan with Howard, Wisconsin, and ttfp.  I had no idea - still don't - who will use them.  I do know, though, that I will eat them rather than have a visitor buy them.  My daughter said she had a co-worker who was a ttfp grad and she might want them.  I haven't talked to my daughter since that exchange.

I think we all understand that there will be people wearing colors other than scarlet and showing off letters other than R at Rutgers home games.  The B1G requires a 3000 ticket allocation to visiting teams.  But do we have to allow even more?  I know: economics, free enterprise, the American way.  Screw it!  This is Big Ten football!  Wake up and smell the Rose Bowl, people!

Ohio State travels really well. Part of this is because the Buckeyes have large alumni bases in NYC and DC ... but there are Buckeyes everywhere (thanks, Ohio economy!). And if you let them, they will buy all of your tickets and turn your stadiums into Columbus East. We're a little bit like locusts that way. Be aware.

And because there can be economic gain, there will be Rutgers folks who will grab the cash and sell their tix to Badgers, Wolverines, and (gasp!) Nitty Kitties.  I want you to think about a Northwestern home game in 2012 against Nebraska.  In that game,

There were so many Huskers devotees among the crowd of 47,330 that the Wildcats had to use a silent count on their final drive because their linemen could not hear the calls.

A silent count on offense.  At home.  Yikes!

Now, we know it will be tempting.  Look at these StubHub prices for the ttfp game as of last Friday (7/25) at 3:30 pm.  That section is 50 yard line, behind the visitors.  Tell me you've ever seen prices like that before for a Rutgers game. 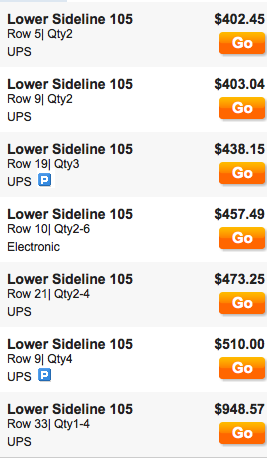 Do what you will, my friends, do what you must.  I only ask that, if you must sell your tickets, that you sell them to someone you know.  Someone who hates small, ornery animals from the midwest.  And who definitely hates mountain lions.