Rutgers Basketball: Which came (comes) first? The RAC expansion or a new arena?

There's an old saying: "Control what you can control." Would a new downtown arena fall into that category for RU or is that something that would take too many partners and just take too long? And be out of its control.

Share All sharing options for: Rutgers Basketball: Which came (comes) first? The RAC expansion or a new arena?

You're Julie Hermann.  You've been given unlimited funds, with no strings attached.   What's your move?

Oh, wait, T. Boone Pickens doesn't live here.  So, where do you turn if you have limited current funds, uncertain (but definitely growing) future funds, and you need to make things happen?  Soon!

Well, you've got a recent history to deal with, going back to 2010 when then-AD Tim Pernetti announced preliminary plans for a major overhaul of the RAC.  And it was in 2012 that Pernetti contracted with Michael Graves Associates to develop plans for the renovation of the Athletic Center.  At that point, Pernetti was still several months away from the beginning of the disastrous next 15 months. The plan at that point was a multi-phase renovation and expansion, starting with new practice facilities for the two hoops teams and moving to the "revenue generating" internal redesign.

And as late as February 2013, the Michael Graves plans were still on the books and still being discussed as on target. The RAC was going to be renovated, expanded, and finally brought into the 21st Century.

But then along came Eric Murdock.  Bye, Tim.  Bye, friendly donors.  Bye, immediate change to the RAC.  And RU athletics is in neutral....still.

The RAC renovation is not merely in neutral, it may be taking a completely different direction as Julie Hermann looks to create a different vision for athletics facilities.

So where does that leave us?  Will the RAC ever be expanded/renovated as the primary home of Rutgers' basketball teams?  The idea of a private arena in downtown New Brunswick, while kicked around in 2007, has never really gained traction.  But could that be a better option for Rutgers and New Brunswick? 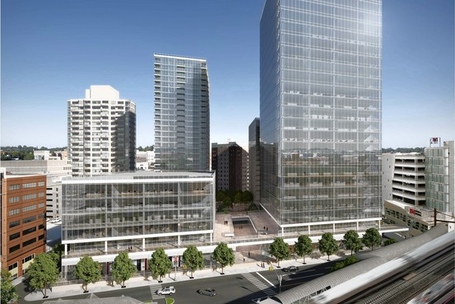 Recent developments involving the New Brunswick Parking Authority and New Brunswick Development Corporation (DEVCO) look to redevelop the area (rendering above) that now is occupied by the closed Ferren Parking Deck.  But that jointure again raises the distant possibility that an arena could fill part of that space.  And why not an arena?  Downtown, hard by the train station, two blocks from the Hyatt and J & J's world headquarters.  Basketball, concerts, University programs and convocations, family shows that don't require locals to travel to Trenton, Newark, or New York. 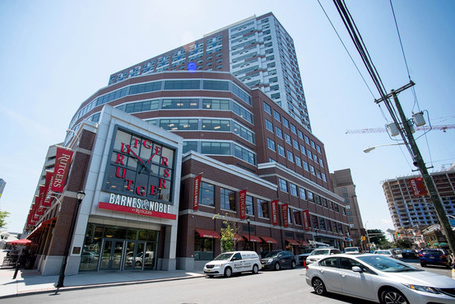 DEVCO led the build of the new bookstore at the foot of College Ave via si.wsj.net

But how long would that take?  Devco will spend the next year just marketing the site, and then.....?  So, does Rutgers try to get in on a downtown redevelopment to build an arena, or does it try to expand the RAC, a process that is a) completely in its control and b) something that might be done more quickly?  Assuming funding is available.  What do you think?