Hermann's unviable strategy is increasingly swimming against the tide

Rutgers athletic director Julie Hermann didn't ease the minds of fans of the school's football program with her recent comments on her first year in the position.

Regardless of Hermann's intention, this is exactly what Rutgers football fans have feared from over a year ago, when talk in Piscataway had an anti-football coalition led by women's basketball booster Kate Sweeney taking advantage of a blindsided and divided pro-football faction to install Hermann, with the stated task of reigning in the football program and focusing more on Olympic sports.

The fact that Hermann's supporters at the time wanted this doesn't mean that she was necessarily bound to their will once in office, but recent events haven't exactly discouraged that scenario. Publicity stunts are one thing, but Hermann still has a poisonous relationship with football boosters and alumni, no doubt exacerbated by a steady flood of anti-Hermann leaks stemming from (ironically) factions close to embattled football coach Kyle Flood, along with other entrenched athletic department employees.

The two are distinguished as Hermann was unable to convince these same boosters to pay to replace Flood last winter, leaving a testy, fractured relationship to fester as the football program's credibility continues to suffer in the eyes of the public. At the same time, her continuing fundraising struggles have led to a plan that comes off as nothing more than a disingenuous attempt to pull the wool over the eyes of football boosters.

One concept that seems be gaining traction, according to those familiar with the evolving plan, is an "athlete's village" near High Point Solutions Stadium. A new headquarters would be built for football, which would vacate the Hale Center for use by other sports. A basketball practice facility would be part of the village.

Former athletic director Tim Pernetti's plan to upgrade the RAC is seemingly dead, as he had several big money boosters ready and willing to open their wallets, only to turn away in disgust with the school administration's idiotic, mind-numbingly stupid ouster of Pernetti as a scapegoat for their failures. Now no one will pay for basketball, which is really struggling, and Hermann wants a way out, fair enough. She's not going to find it though on the backs of angry football fans, who still want Pernetti back, who want a real coach, who are sickened at the thought of struggling this fall in an embarrassingly weak, absolutely ripe for the taking Big Ten conference.

We're at our wits end, and she wants to us to pay for basketball, never mind a bunch of sports that are nice if they are successful, but we ultimately don't care about? With a program years from getting a full Big Ten revenue share? The reason this plan will fail is twofold. Firstly, the Hale Center still remains an excellent practice facility for football. If we upgrade/replace it now, as opposed to thirty years into its life cycle, Rutgers athletics really will turn into the ridiculous caricature of a money pit that it has falsely been portrayed as, when in reality it was making wise, prudent investments in the future that paid off tenfold with football eyeballs bringing Rutgers into the Big Ten conference.

Yeah, it'd be nice if we had everything, but there's only so much money to go around. All of these ideas have an opportunity cost, and unfortunately that money has to go to football; especially now that things have taken such a sharp downward turn under Flood. Football is a necessity if you're investing in athletics, and what Hermann doesn't understand is that everything else is a luxury. Do we want to end up desperate and indebted like Maryland, who were essentially sinked by basketball? Priority #1 is getting football back on track, priority #2 is becoming self sufficient, and everything else simply has to take a distant third.

Secondly, this notion that we'll even have extra football funds to build up the non-revenue sports might soon be off the table entirely thanks to the NCAA's laughable performance defending the O'Bannon case. As I have argued many times, the idea that most schools are getting rich off big time college athletics is a ridiculous fiction. Football on average earns a hefty profit, and men's basketball to a lesser extent, but these monies are then turned around and used to prop up sports that otherwise could not generate enough revenue from fan interest. 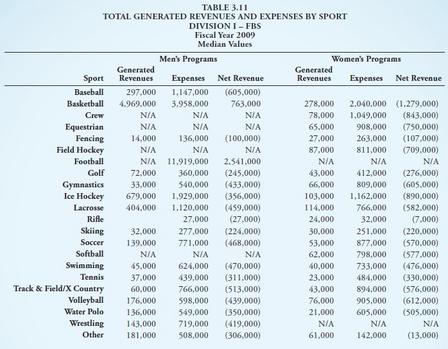 If that subsidy money is instead going to football and men's basketball athletes, then you can say goodbye to most of these sports across the NCAA, never mind in New Brunswick and Piscataway. Think of airlines as a good example of market forces at work. This industry used to be highly regulated by the government, and as a result, the airlines could not compete on price; they instead competed on service, and flying in general was pretty pleasant. Then, Jimmy Carter came along, and in one of his lesser known acts, pushed for the deregulation of the industry. Pretty soon, it was one gigantic race to the bottom, with JetBlue being the exception to carriers like Spirit Air that try to slowly drive you insane in the name of the lowest possible price.

That's the end result of O'Bannon, which will probably also help push the big five conferences down the road of secession from the NCAA, in the name of slowly fending off their own demises. Good riddance I say; deadweight loss is deadweight loss, whether it's friendly service, or watching an exciting NCAA tournament game with Butler squaring off against Wichita State. Yes, there's a hidden cost in everything; more spots at the table for the mid-majors and the Big East conference mean less for us. While it'd be nice for Rutgers athletics to get its act together on its own, I'm not exactly holding my breath given recent events. It's not really personal (except for the Big East, which deserves all manner of contempt that you can bestow upon it), but they're another obstacle in our way, so it's in our interests that they be destroyed.

The fact that Hermann doesn't realize this, that she still has a little sport mindset when there is so much at stake, is really the reason more than anything else why she is dangerously unqualified to be the athletic director at Rutgers University, and every single day that she remains at her post remains a continuing unimaginable tragedy. The fact that Flood is causing even more damage, that the media is giving Penn State a free pass and has a propensity to often say stupid things about Rutgers, or any other number of a uncountable myriad sins shouldn't take away from this clear truth. The end game of college athletics, the deliverance that Rutgers fans have anticipated for so long, is well nigh upon us, She's a problem, and we need to ditch the Fred Gruninger/Julie Hermann playbook once and for all, and get back to Tim Pernetti's big time mindset while we still have a chance.