This weekend, Twitter and the message boards lit up with speculation that Rutgers targets Dontae Strickland, Daivon Ellison and possibly a third Jersey player (Dave Ryslik) were on the verge of committing to Syracuse. So far at least, the rumors have not panned out, but how did we even get to the point of worrying about Orange footsteps behind us? OTB takes a look at the big-picture state of Rutgers recruiting, nine months before signing day.

Here are the caveats, before we dig in:

1) It is May. None of this is official until the fax machine stops humming in February. Deep breaths, y'all.

2) A LOT can happen between now and February, as Rutgers fans well know. Great classes can crumble, kids can change their minds, 2-stars get bumped to 4-stars, coaching staffs change (in whole or in part), and charismatic carnival barkers can parachute in and lure the number two class in the country to a beet field in central PA (Schrute Farms FTW), so anything is possible.

3) No single player's decision to go elsewhere is a crisis by itself. There is also some speculation that Rutgers has cooled on recruiting Daivon Ellison. That is just a rumor, so take it as you will, but it is obviously not fair to hold a player's commitment to another school against Rutgers if RU is not even recruiting the kid for whatever reason. (Strickland is another story - he practically has his own parking space and coffee mug at the Hale Center, and we are definitely going hard for him).

4) This is NOT meant to denigrate any of the kids already committed to RU. My issue is not with the guys from whom Rutgers is securing commitments, but rather with the guys who are not even giving the State University of New Jersey a respectful look. There are a lot of reasons to be excited about the guys who have already committed, and Kyle Flood's greatest strength might be identifying hidden gems.

But do they ALL need to be hidden gems? Rutgers is not even in the game with many of the top players in New Jersey, let alone the broader, apocryphal "State of Rutgers." Where's the sizzle with the high profile guys?

Out of that group, RU has one commitment (Dare), and is in the mix with only a handful of the top players in the state. If Strickland and Kelly go to Syracuse, Madden and Charles head to points south, and Hartsfield goes to Schrute Farms ttfp, the situation is even bleaker.

Forget competing with the Nitty Kitties, Buckeyes, Crimson Tide and Irish for a minute, because the lure of 100k+ seat stadiums, high profile coaches and storied programs will always draw a few of New Jersey's finest. That is disappointing, but neither heart-breaking nor surprising. The more troubling news is that we are involved in - and sometimes losing(!) - recruiting battles against long-vanquished foes with empty off-campus stadiums, terrible locations and climates, and/or weird fanbases: Syracuse, Temple, Pitt and BC, to name a few.

Strickland, Ellison and Ryslik did not commit to Syracuse this weekend, but the fact that Cuse is even a credible recruiting threat after so many years of Rutgers dominance is a concern in and of itself. Rutgers has so much more to offer these kids than places like Syracuse or Pitt do, and these kids need to see that reality.

Rutgers plays in a lively on-campus stadium that regularly holds 50,000+, and will sell out all of its conference games this year (in case you haven't heard, that would be the B1G conference, not the ACC). Rutgers' track record for placing guys in the NFL - and having them "stick" on NFL rosters - is in a different universe than those schools. Rutgers' academic success, both as it relates specifically to athletes and more broadly to the university, is stellar and well-documented. The BTN is now (or shortly will be) on basic packages on every major provider in the area, and they are going to ramp up the Rutgers coverage this summer. Rutgers football facilities are on par or better than many of our B1G colleagues, according to the BTN's Gerry DiNardo, somebody who definitely has the perspective to credibly assess that issue. 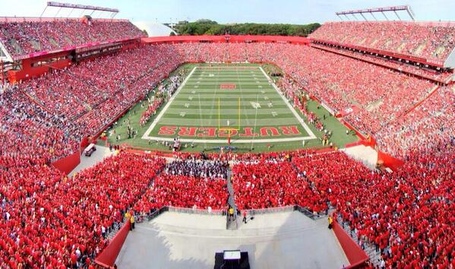 Jersey guys willingly missing out on this scene? Fuhgeddaboutit

Losing a few recruits every year to tOSU or even ttfp is manageable, especially if Rutgers can pull some great talent from Pennsylvania and Ohio in return. But losing New Jersey kids to the likes of Syracuse, a basketball school buried in the frozen tundra of central New York, a team that a) plays conference football games before 21,000 fans in an old, depressing dome ranked as the second-to-worst football venue in the ACC; b) has been woeful for fifteen years (74-96 since 2000); and c) lost by a combined 164-17 to FSU, Clemson and Georgia Tech last year? THAT is unacceptable, especially given that Greg Schiano had effectively made New Jersey and even a large portion of New York a no-fly zone for the Orange.

So what's going on here? Coach Flood is a good coach and by all accounts, a very solid human being, who I think will do better this year than a lot of people expect (more on my reasons for optimism in a future post). He also had no problem pulling in high profile Jersey recruits after a 9-4 season in 2012 (keeping them after a disappointing season is a different story).

My guess is this is mostly about negative recruiting by other northeast teams and an in-flux contract situation. The perfect storm of unusual/bad news (Tyree/Thomas/bad losses/decommit chain reaction) last season did not help either. Flood is in a very difficult spot, at least until games start. The haters are out in force, and it is not hard to envision Matt Rhule (Temple), Steve Addazio (BC) and Scott Shafer (Cuse), not to mention the shiny-headed beet-farmer-in-chief and Uncle Urbz, whispering about Kyle Flood's hot-seat status to these kids. Maybe they pull out a copy of Rutgers' 2014 schedule, ask how many wins the kids think Coach Flood needs to keep his job, and then play the win-loss-win-loss game with a heavy thumb on the scale, likely coming out somewhere near 4-8. Maybe they are even more aggressive, and give RU wins vs. Howard and Tulane, but losses everywhere else for 2-10.

Winning this year cures everything, especially if Rutgers makes the most of wins in certain prime-time BTN home games in an electric High Point Solutions Stadium environment. If Kyle Flood goes 8-4 (maybe as low as 6-6, depending on how the wins and losses look under the eye-test) against a murderer's row schedule, he probably gets a contract extension and salary more in line with the rest of the B1G head coaches. If that happens, the whispers on the recruiting trail vanish. Interestingly, losing also provides resolution, because Coach Flood will likely be gone, and Julie Hermann will have a new high-powered coach recruiting an absolutely stacked NJ Class of 2016.  The recruiting situation should be a lot better next year either way, but it's not going to happen immediately.

Until we see the results on the field, Rutgers fans are probably left to hope for a major change in momentum, and to trust Coach Flood's and the staff's eye for under-the-radar talent. The catalyst for that momentum shift is not readily apparent, but sometimes, it only takes one recruit or one dramatic win to start a chain reaction.

Rage, vent, speculate, insult (not the kids please, be classy) - and hope - in the comments below.