A Rutgers Winter and Comparison to The Big Ten

And you thought it was cold in Minnesota! It was a brutal winter in New Jersey (Let's avoid the obvious retort here) - at least it was outdoors. But indoors, in the gym and in the pool, Rutgers looked a lot better than it did during the fall season.

Share All sharing options for: A Rutgers Winter and Comparison to The Big Ten

The Rutgers fall sports put together a rousing 40% winning percentage (excluding football), putting the Scarlet solidly behind every B1G team - including Maryland - in overall winning percentage. The winter season, however, came together a bit better; I guess being indoors is preferred On the Banks.

Let's look at the B1G sponsored sports that RU participates in compared to the neighborhood we're heading into next year.

Wrestling went 11 - 5 on the season and beat future conference foe Michigan State. It also lost - by 1 point - to another future B1G member, Maryland. In its final go round in the EIWA, the team finished third in the tournament, sending four on to the NCAA championships in Oklahoma City. There RU finished 34th with 11.5 team points. Doesn't sound that great, but it put the team in the middle of the pack (34 out of 66 teams). Of greater importance, redshirt sophomore 157-pounder Anthony Perrotti achieved All-America status to become the first Scarlet Knight to reach the NCAA Championships podium since 2002. All very good news.

The Knights had a nice final season in the East Atlantic Gymnastics League (EAGL), finishing third in the Conference Championships. The team qualified for the NCAA regional in Athens, GA. As for the quality of their work, Rutgers had a #11 RPI behind only 3 B1G teams. Senior Alexis Gunzelman qualified for the NCAA Nationals in Birmingham, Ala., as an all-arounder, one of only 12 qualifiers in the AA. Rutgers gymnastics third-year head coach Louis Levine was selected as the EAGL Coach of the Year and the National Association of Collegiate Gymnastics Coaches/Women (NACGC/W) Northeast Region Head Coach of the Year. He began his coaching career at his alma mater, the University of Michigan, so he knows what it takes to compete in the B1G.

And RU gymnastics was a pretty hot ticket: it sold out its final meet, and saw almost 1000 fans per meet. (FYI, WBB averaged 1812)

As a team, Nebraska made the Super Six (gymnastics Final Four). The last NCAA rankings for B1G teams saw Michigan at #7, Nebraska at 9, Illinois 11, Minnesota at 14, TSIP 15, and Ohio State #22. All six of those teams made the regionals with TSIP, , Illinois, and Michigan moving on to the national semifinals with Nebraska.

Another "rebuilding year" in Piscataway, eight years removed from the last NIT appearance and (close eyes and take a deep breath here) 23 years since the last NCAA bid. Yeah, it's been really ugly around here for a long time. The record over the last five years? 73-89. Finishing at 12-21 is a rough way to enter the B1G. But this has been covered ad nauseum on this site so we'll just move on to our future brethren.

Wisconsin makes the Final Four. Six make the Dance with three in the Elite Eight. And Minnesota, under Richard Pitino, won the NIT. Illinois also made the NIT field. Only three of the 12 teams had overall losing records. I'm stopping 'cause I'm feeling just a tad nauseous.

C. Vivian seemed to put together a pretty good club, although there was no way to climb past UConn and Louisville in conference. But she did put together a post-season run after being left out of the NCAAs for the second consecutive year. Tyler Scaife was an incredible addition to the team, as she was named AAC Freshman of the Year. She and Kahleah Copper were named to the WNIT All Tournament team with Copper the tourney MVP. With no seniors, the team finished 28-9. That's a nice way to enter the B1G.

From the B1G, five teams made the NCAA; six if you count Mary-land that went to the Final Four. Another four were in the WNIT with RU. That means 11 of the future Big 14 teams made the post season. Four of the twelve current teams had overall losing records, but the other eight had at least 20 wins.

Rutgers redshirt junior Corey Crawford (son of ESPN host Jay Crawford) was named a U.S. Track & Field and Cross Country Coaches Association First Team All-American for the 2014 indoor season based on his second place performance in the long jump at the NCAA Division I Indoor Track & Field Championships. He became Rutgers' third First Team All-American since 2010. He was also the AAC Field Indoor Performer of the Year. And he's still going strong in the spring.

As a team in the AAC Championships, the men finished in 6th place (out of 8, ahead of Cincinnati and Temple). UConn won the men's team championship. (In February, Temple announced it was dropping men's track along with several other sports.)

SMU won the AAC Championships while Rutgers finished 9th, ahead of only Temple. Sprinter and long jumper Asha Ruth was a standout all season, taking a second at the AAC 400 m and winning the LJ. As far as we know, Temple still has women's track. 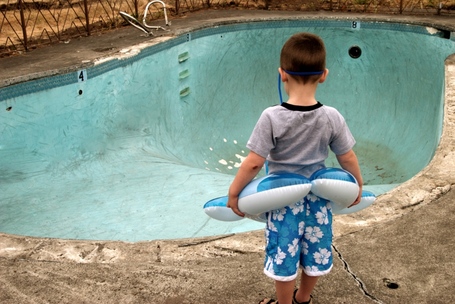 Oh, wait. We don't have a men's swimming and diving team.

Phil Spiniello was named the American Athletic Conference Coach of the Year after leading Rutgers swimming to a third-place finish at the inaugural AAC Championships. It marked RU's best finish at a conference meet since the 2006-07 campaign when the team finished second at the BIG EAST Championships. Rutgers earned eight medals at the AAC, including two gold by Joanna Wu in the 100 and 200 back, two silvers by sophomore Morgan Pfaff in the 200 and 400 I.M., a silver by Nicole Scott in the platform, a bronze by senior Brittany Guinee in the 200 fly and two additional bronze medals in relay events.

Rutgers concluded the 2013-14 regular season with a 9-4-1 record in dual-meet competitions,with four victories to end the season. Two of the Scarlet Knights' four losses on the season came against ranked opponents - No. 24 Michigan and some Catholic school in Indiana. In addition to Michigan, RU also faced off against future Big Ten opponents Illinois and Northwestern. Rutgers battled the Fighting Illini to a 150-150 stalemate, winning nine of 16 events.

Sophomore Wu and senior Scott, concluded competition at the 2014 NCAA Women's Swimming and Diving Championships with Scott advancing to the finals of the platform event en route to Honorable Mention All-American honors.

Well, hockey On the Banks isn't a varsity sport. But for good measure, let's throw it in to our conversation since it is a new B1G-sponsored sport, and one that is actually a revenue sport at several Big Ten schools.

This was the first year of hockey as a B1G sport. It is big time - and a revenue sport - at Minnesota, which won the regular season B1G title and made the 16 team NCAA field. They made the Frozen Four finals, losing to eventual champion Union College (ya don't have to be big to be good). Wisconsin also made the NCAA tournament, after winning the B1G tourney.

Anybody out there got a few million to start and endow a hockey team? Now that would endear us to the B1G faithful.

The Cup is a measurement of overall program quality; RU was in 113th place after the fall season, behind "powerhouses" Montana, McNeese State, Fordham, UMass, and St. John's.  Just for giggles, Syracuse was at 26, Uconn at 29.

After the fall season, Michigan State was 2nd - overall, not just among the B1G. TSIP and Wisconsin were tied for 6th, Michigan was 13, Mary-land was 21, and Indiana 25.

For comparison, in 2012-13, Rutgers finished the year at 120th. Michigan, TSIP, tOSU, Minnesota, and Nebraska all finished in the top 25. That year, the Scarlet Knights finished behind (among many) Dartmouth, UConn, Yale, Boise St, Creighton, and Stony Brook.

Oh, and also behind Fairleigh Dickinson.

Amazing what a few winning teams and some national rankings can do. After the winter season, Rutgers moved up to No. 71 in the Learfield Sports Directors' Cup standings. The results from those aforementioned winter sports - women's basketball, women's swimming, both track & field teams, gymnastics, and wrestling - earned triple the points for RU than were earned in the fall. Seven B1G schools are in the top 25 after the winter, with TSIP at No. 2 behind Stanford which tops the list. The B1G leads all conferences in that regard. Four B1G schools plus Mary-land are currently ahead of Rutgers with Iowa (66) the closest.

In the original posting of this piece, the Directors' Cup sponsor was incorrectly identified.  It is, in fact, sponsored by Learfield Sports.  The final 2013-14 standings will be released around June 26 or 27.