Running back entered spring camp with a clear delineation between starter and backup. Is there a challenger waiting in the wings?

Unlike quarterback, the running back position for Rutgers is set heading into the long offseason before training camp. Former walk-on Paul James is the clear-cut starter for the Knights, and Justin Goodwin is poised to be the backup. Savon Huggins, who flirted with a decision to transfer, is currently lined up to be third-string, but redshirt sophomore Desmon Peoples is quickly closing in on him. Instead of looking at the strengths and weaknesses of each player, let's go over the position as a whole:

Depth - Bodies will not be an issue. Paul James was a first-team All-American (Athletic Conference) last season, and is proven to be a stud runner - when healthy. If he's out, Justin Goodwin has proven to be more than capable of picking up the slack, as he had century mark rushing performances against SMU and Houston when James went down with an injury. Huggins may not have the production of James or Goodwin, but at the very least his experience should help him to service a quarter or two. 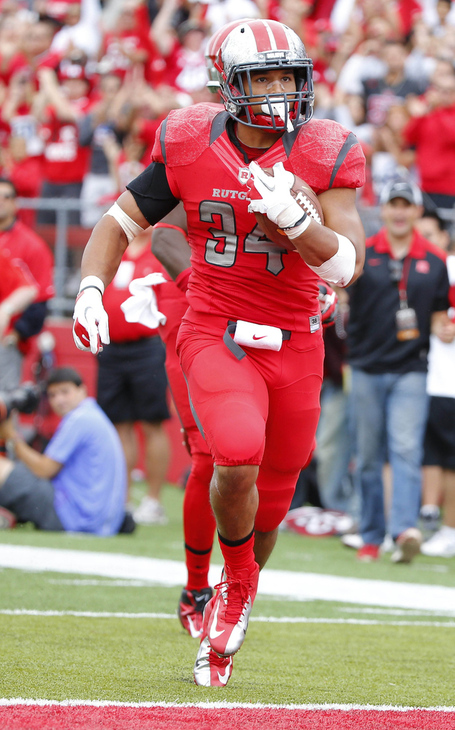 If that's not enough, Desmon Peoples is having a spring to remember. After making a case for starter one year ago when he was named 2013 Most Improved Offensive Player, the 5'8" running back is at it again, turning heads with his solid production during the offseason. When Kyle Flood was asked about Peoples' resurgence as a candidate for playing time, he had this to say:

Behind all that coachspeak is an important detail - Peoples is learning all aspects of his game. Sometimes people wonder why a certain player isn't seeing the field despite apparent skill at the position. Many times, it usually has to do with something like pass-blocking, or some other facet of the game. Most young backs struggle with the notion of pass-blocking, but Peoples is using his experience to make himself a more complete player.

Production - It's one thing to have depth, but having proven playmakers gives you a ton of more confidence heading into a season. James is an aforementioned all-conference player, and Justin Goodwin flashed serious ability as a true freshman. The duo rushed for 1,402 yards and 14 touchdowns in 2013, and that was with James missing four games during the season. Obviously the unknown factor helped both players find success, but a renewed focus on RU's running game should alleviate some of the stress on the quarterback. And we all know that's something that is desperately needed.

Health - Simply put, our best running back has a tendency to get hurt. Paul James has no problem with physicality - he fears no lineman, linebacker, or defensive back. However, he's struggled with the injury bug his entire career, so all eyes will be on his ability to stay healthy in 2014. It's a good sign that James returned to practice on Tuesday after being initially held out due to a shoulder injury. Justin Goodwin was also held out of spring practice due to a lower body injury, giving Desmon Peoples the opportunity to impress the coaching staff. Goodwin had injury problems last season as well, so depth will be a key factor once the meat grinder of the Big Ten begins. 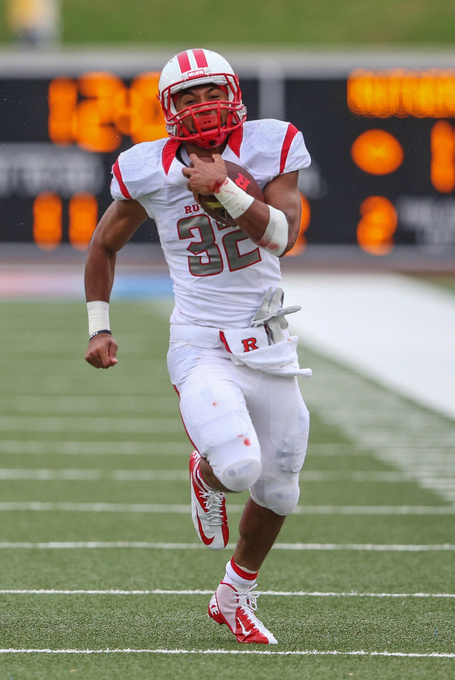 Pass blocking - This is a quality that sometimes goes unnoticed, but is nonetheless important. Pass blocking needed a lot of work over the offseason, especially with Justin Goodwin. True freshmen generally don't have the technique down so early into their careers, which is mainly why Savon Huggins still got some reps last year. Even with his mediocre production, Huggins remains as one of the better options in pass blocking situations. James and Goodwin don't lack for size in taking on pass rushers, so some marginal improvement can drastically help the quarterbacks in passing situations. Desmon Peoples is even showing progress as a pass blocker with his compact frame.

Running back is actually in good shape compared to a lot of other positions, namely quarterback and cornerback. The ground game has a chance to hold its own in the new conference, and should keep Rutgers competitive with our new conference mates.