The Scarlet Knights broke ground on the 2014 Spring football season. What can we expect out of Kyle Flood's third year?

This is it folks. We are officially preparing for the Big Ten this spring. I can literally feel the excitement coming through your computers right now. The first practice was held yesterday, and the entire offseason schedule culminates on April 26 for the annual Scarlet & White game. What can we look forward to as Kyle Flood prepares for a whole new ballgame?

Do we have a QB? Oh..Gary. You had so much promise. Unfortunately, your time on the banks has led to this:

So who will win the starting job? Your guess is as good as mine. In yesterday's practice, the quarterback competition did not quite produce a leader among the group. Flood had this to say about his group of five:

It looks like we'll have to wait quite awhile for anyone to really take hold of the starting position, as interceptions were thrown abundantly by all. The competition between Nova, Blake Rankin, Chris Laviano, Mike Bimonte, and walk-on Devin Ray might not even be finished by the time spring practices are over. However, Flood did state that he would at least like to settle on three names to reduce the myriad of reps, as it's hurting the offenses progression to split among five QBs. Let's hope someone emerges soon.

Will the pass defense improve? The defense is in sort of a precarious situation. They really need to improve against the pass, as that was an atrocious unit last year. Improvement might be hard to do against a weak quarterback unit. In other words, it'll be hard to tell if the secondary is improving or if the QBs are just throwing ducks into the wind. It's hard to imagine such a drastic improvement after a couple of months removed from giving up the most pass yards in school history, but hey, you never know.

Can the offensive line finally find it's groove? New offensive line coach Mitch Browning should ease into his new role quickly, as zero turnover is expected along the trenches. Keith Lumpkin, Kaleb Johnson, Betim Bujari, Chris Muller, and Taj Alexander all return with a heavy dose of starting experience. Obviously, the Big Ten provides a huge jump in strength of schedule, but many of these players have more than one year of starting experience. It's time to reap the benefits.

When will see the Fridge's offense? Ralph Friedgen brings an incredible amount of experience as an offensive mind from fellow B1G newcomer, Maryland. When will we see his offense take form? It'll be hard with the tools he has to work with at QB, but the wide receiver group continues to be a strength of the Rutgers offense. Let's hope the unit gels quickly so the Fridge can install his gameplan soon.

Will Rutgers make a bowl game? Six wins is all it takes to make a bowl game, but getting six games in the win column will be more difficult than years past. If you give the Knights a 3-1 record in the non-conference schedule, that means Rutgers will have to muster three more wins in B1G play. Indiana and Maryland are the most likely options for two of the wins, but RU will need an upset to make a bowl. A win against that team in PA could be absolutely huge, and not just for historic purposes. 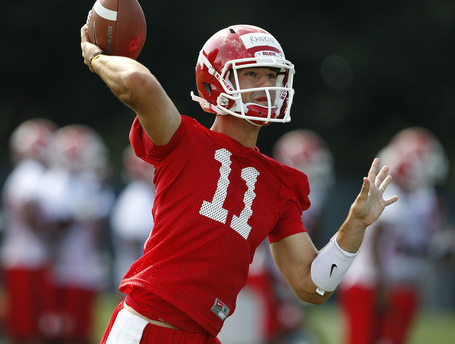 Cornerback - Similar to quarterback, the corners were nothing to write home about last season, so this position is definitely open for some movement. Gareef Glashen will be a senior this season and did start six games in 2013, so he appears to be a favorite. Nadir Barnwell showed that he has the physical tools to cover receivers adequately, but he a lack of the ball skills required to be a an effective corner last season. Of course, Ian Thomas does return, but Coach Flood was adamant that he must reclaim his job and his teammates if he wants to play. Finally, Rutgers brings in several newcomers at the defensive back position, including Kam Lott, Saquan Hampton, and Andre Boggs. It's possible that they could challenge for a starting position as well.

Safety - Lorenzo Waters will most likely remain as starter at the strong safety spot, so all Flood needs to do is find his partner on the field. Johnathan Aiken could be a good option since he filled in for Waters during his injury rehab, while Delon Stephenson has experience there as well. Tejay Johnson was just short of a disaster as a DB, so the Star-Ledger is reporting that he will be moving back to wideout.

"R" Rush End - The interior of the line is all set. Future all-conference player Darius Hamilton mans the three-tech spot, while Kenneth Kirksey can play the other DT position. Djwany Mera is back, and David Milewski returns as a fifth-year senior and can play the "E" position, so that leaves the pass rush specialist position open. Several candidates are available, including Kemoko Turay and Julian Pinnix-Odrick, although JPO has a chance to remain inside along the line. Quanzell Lambert played several games at the rush end position last season, so Flood might decide to keep him there, but he's quite undersized for B1G play. Flood might be forced to go for a bigger body.

The most prominent change is LB Steve Longa moving to the will position, the same spot Khaseem Greene played during his Defensive Player of the Year run. Kevin Snyder will move inside to MLB. This looks like a perfect move for both players, as Longa can really utilize his freakish athletic ability and Snyder can provide guidance and leadership from the middle.

Other changes could be made in the secondary. The defensive back rotation throughout last season was similar to a game of musical chairs, and you can expect Flood and DC Joe Rossi to tinker with the lineup to see who fits best.

In other news, defensive lineman Max Issaka and safety Sheldon Royster are no longer with the team. Both were suspended for the Pinstripe Bowl for an undisclosed violation of team rules.

The B1G is almost here.