Young Buck of the Rutgers Pitching Staff: The Case for Gaby Rosa

After his performance at no. 7 Louisville, freshman pitcher Gaby Rosa has proven that he is no fluke.

Share All sharing options for: Young Buck of the Rutgers Pitching Staff: The Case for Gaby Rosa 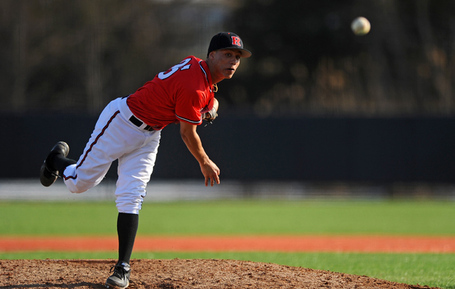 This wasn't exactly a part of the plan.

Freshman righthander Fernando "Gaby" Rosa was originally recruited by then-Rutgers baseball head coach Fred Hill primarily to play middle infield. A four-year letter-winner at Perth Amboy, Rosa was an All-Middlesex County selection at shortstop in his sophomore and junior years. As a junior, he batted a career-best .440 where he scattered 33 hits (117 total) and 16 RBI with a .543 on-base percentage. The speedy middle infielder was also a perfect 15-of-15 in stolen bases on the season.

But everyone knew where his bread and butter was: on the mound.

As someone who faced him personally and competed against him for four years at the next town over in Woodbridge, I'll be the first to tell you that Rosa was the real deal on the mound and everybody knew it. He was the type of kid that could throw fastballs all game long if he wanted to because he could touch 90 mph. Kids still managed to hit him from time to time, but for the most part, he dominated and only one stat is really needed to prove the point: He struck out 277 batters over four years.

Head coach Joe Litterio gave Rosa a shot to see what he could do in the second game of a doubleheader loss at Old Dominion on March 1, and Rosa's two strikeouts in two innings were enough to reward him with more time on the mound.

After making two more relief appearances in a series at Oklahoma followed by three strong innings of relief in the home-opener win over Hofstra, Literrio gave Rosa the nod to start and boy, did it pay off.

Rutgers opened up AAC play on the road at no. 7 Louisville. Yes, as in seventh in the country. You know, the team that won a program record 51 games last year, went to the College World Series, and won the Big East.

The Scarlet Knights dropped the first two games of the series to the Cardinals, 6-1 and 9-8, respectively.

So who did Litterio turn to on the third day to avoid the sweep? Rosa.

The inexperienced true freshman made it look like he was a senior who had been there countless times before. Rosa shocked the crowd at Jim Patterson Stadium, yielding just three hits in eight innings to guide Rutgers to a 11-2 win and avoid starting conference play 0-3. His eight-inning gem, where he didn't allow an earned run, stands as the longest performance by a Rutgers pitcher this season. And despite beaning two batters and allowing one walk to zero strikeouts, Rosa located for the most part, leading to frustrated Louisville batters grounding out seven times and flying out 17 times.

The outstanding performance led to Rosa being named to the AAC Weekly Honor Roll. On the season, he holds an unblemished 2-0 record with a 1.69 ERA to show for in 21.1 innings of work. Opposing batters are batting just .179 against the rookie.

He isn't the ideal ace pitcher when you look at his 5'11", 160-pound frame -- a generous listing. And right now, he still isn't the ace of the Rutgers staff. That title belongs to sophomore lefthander Howie Brey, who has a 2-1 record and a 0.96 ERA (despite 12 walks to 11 strikeouts).

But there's no doubt that Rosa is on the rise. The rookie proved last weekend against the seventh-ranked Cards that his early success on the mound is no fluke, and it will be interesting to see where he fits in the rotation as the season progresses and he continues to get his opportunities.

One thing's for sure: He won't be seeing middle infield anytime soon, and quite frankly, that isn't a bad thing at all.

You know the old saying: Some of the best things in life happen unexpectedly. Well, Rutgers has something special brewing on the mound in its freshman righty.