Rutgers Trea$ure Hunter: collecting is part of the charm of being a fan

We all have stuff from games we've attended. Some of it gets thrown out when we get home. But other items, for whatever the reason, stay with us. And become part of our personal sports history.

Share All sharing options for: Rutgers Trea$ure Hunter: collecting is part of the charm of being a fan

Everyone's favorite new channel, the Big Ten Network (BTN) has a new show, Big Ten Treasure Hunter.  Host and memorabilia expert John Arcand travels the footprint of the B1G to find collectors who have unique, fun, and in some cases unbelievable artifacts from their favorite Big Ten team.  And there are some crazy items, like the piece of the court from Assembly Hall at IU where Bobby Knight threw the chair.  Some guy has it.

Well, we were wondering, what about Rutgers fans.  There have to be some folks out there who have "stuff" that they've collected over the years commemorating Rutgers athletics.  And then I looked in the mirror.  Yeah, I got stuff.  There's a fine line between collector and pack rat and I may have crossed it.  But we're going to give it a shot.

First up, bowl rings.  Yes, I have several due to the fact that a few years ago I worked (for free) at Rutgers practices as an official.  As part of our reward, we received bowl rings, just like the rest of the team and staff.

We - the officials - weren't expecting this until they asked for our ring sizes.  And the next thing we know, we have rings.  Let's take a look at the first one, the Insight Bowl from 2005.  Rutgers' first bowl since the 1978 Garden State Bowl (and, yes, I attended both). 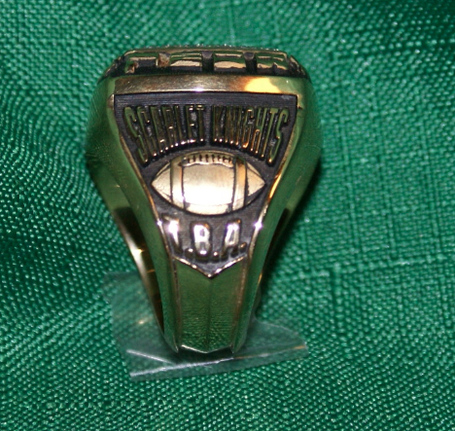 The ring is embossed with the team's TBA mantra: Trust, Belief, Accountability.  The opposite side has my name and a large block R. 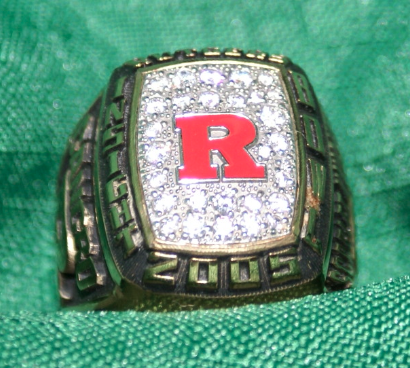 Now, what's its value?  I have no idea.  If everyone in the program got one, it cost a good buck, but I doubt those shiny stones are diamonds and the ring itself is likely a low carat gold -- if it is gold.  But the value to me is priceless.  I was on the practice field all season and was there when they prepared to play Arizona State in the program's second bowl.

On the Banks will do this again.  And you can be a part of it.  Do you have an interesting piece of Rutgers sports history in a closet, garage, or attic?  We can feature that in a story.  Contact us at  onthebanks.sbn@gmail.com. Include a picture and a description of what it is and where it's from.  We got stuff, too!