Yesterday afternoon saw the Scarlet team prevail over the White, 31-14, in the final spring intrasquad scrimmage for the Rutgers football team. The end results were...pretty much exactly what would you would expect from a group of largely first-stringers competing against a group of largely second-stringers (wily cad Jawan Jamison at least pulled double duty), in a relaxed atmosphere no less featuring simplified schemes and limited special teams play. There weren't exactly fireworks on display, but the offense looked far more potent than it had a year prior, which unfortunately turned out to have good predictive value for what was to come.

In this particular instance a simplified approach proved for the best. As hard as this may seem to believe to anyone recalling the past two years of a spread offense and the wildcat formation, both offenses yesterday frequently lined up in the I formation. And ran straight ahead running plays out if. Successfully at times. It was as if nuclear winter had inaugurated a thousand years of darkness, and every Rutgers fan sitting in the surrounding stadium was left to marvel and awe over the rediscovery of fire. Good luck projecting today's results to this fall, with numerous players sitting out on both sides of the ball. From what was on display today however, the offensive line possibly may not be historically inept in 2011. One can only hope anyway.

Chas Dodd's accuracy and strong arm were on display all game whenever the Scarlet team was on offense. He showed a knack for hooking up with redshirt freshman receiver Brandon Coleman all game. The pair had all the makings of a future dynamic duo. The only real issue was that at times Dodd would get overconfident and try to air it out to Coleman with multiple defenders in his vicinity, hoping that Coleman's height advantage would make up for the numbers disadvantage. Chas stared down receivers on occasion, but generally was good about spreading the ball around. The other skill position player that stood out as impressive was Marcus Thompson as a receiving fullback out of the backfield. Everyone around was wondering why he was on the White team and not Scarlet.

The athletic department announced an official attendance figure of 21,120 yesterday. Once again there was no official count. Last year it was somewhat easy to come up with an estimate, as every fan was crowded into a few sections. This time everyone was free to pick as they pleased, with people making a beeline for the best seats for the most part. My estimate was about the same as it was last year (15k), when the official figure was 20,114. The weather was reasonably good, although it was a little chilly. Traffic didn't seem nearly as bad. Having more pre-game events might have had an effect with that. One downside is that there seemed to be a smaller crowd at the various events on Cook and College Avenue as a result. 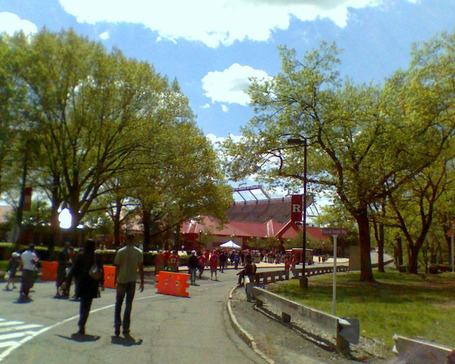 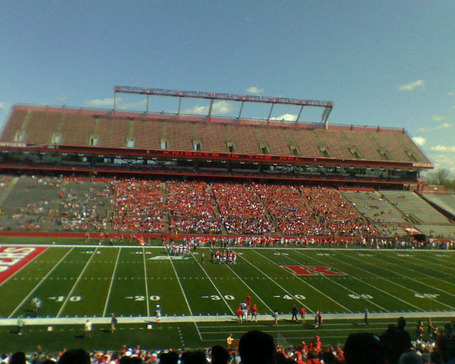 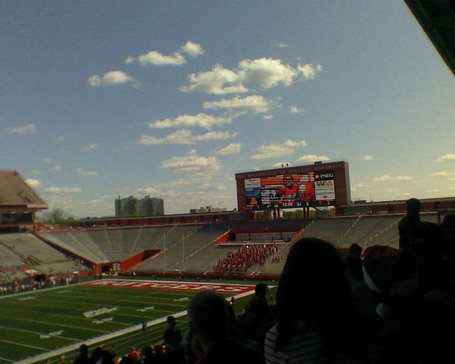 Of course, it was good to see a lot of old familiar faces (with the notable exception of Kenny Britt), and to see Eric LeGrand show up in good spirits.

Did anyone else notice the Franklin High School Project Graduation banners at concession stands? Are there any other known attempts at monetizing the stadium with third-party events?

In the end there were not many earth-shattering revelations on the day. For the most part everything on display confirmed all of the reports coming out of practices this spring. For as much as you can gather at this sort of scrimmage, things look to be moving in the right direction and are relatively a big improvement from last year. The team still very much looks like a work in progress though. Enjoy your three months of no football.