Fouls calls in basketball are influenced by a variety of factors, including the following:

1. Strategy. Late in the game a losing team will usually foul to save time on the clock if a game is relatively within reach (10 points or so). This is certain to skew foul totals to a certain extent in favor of winning teams, and as such should not be taken as absolutely definitive on its own. It's somewhat analogous to how a football team nursing a lead will run the ball to eat some clock; therefore, it would be a mistake to draw a naked correlation between rushing attempts and wins.

2. Aggression. Teams will intentionally engage in strategies that are more likely to foul because they believe that the payoff (lowering an opponent's FG%, inducing fatigue, forcing turnovers) will be worth it.

3. Structural. Drawing fouls requires having players warranting the respect of opposing defenses. Teams/players that cannot create shots or drive to the basket won't draw as many fouls.

4. Bias. This is not intentional bias. Stars and big name teams draw respect. Any competent coach will be working the referees throughout the game. Also, as Mike Vorkunov pointed out yesterday, refs are biased in favor of home teams.

Any team's foul disparity, whether positive or negative, is undoubtedly a combination of these and other factors. Arguing which has played the greatest role for Rutgers this year is a topic for another post. The purpose of this preamble is to give some context for the following numbers, which show definitively that Rutgers has not fared well in Big East play on a number of foul-related metrics.

Here's some relevant StatSheet numbers for conference play only plugged into Excel.

Unfortunately, this data cannot be sorted in an embedded Google spreadsheet. If you want to sort it, click here, and download it as an Excel file.

Here are the relevant rankings.

Rutgers is called for the most fouls in the Big East. Clearly the problem isn't necessarily 100% structural, because if it was then DePaul would be in first, and Louisville wouldn't be ranked so high. If you look back at the first table Rutgers draws the third fewest fouls in the conference, which leads into the following sorted column.

For whatever reason, 5.43 more fouls are called on Rutgers than its opponents per Big East game, the largest disparity in the conference. DePaul closely follows at 5.29. Four of the Big East's five double-digit loss teams have four of the five highest foul disparities. Again, that could just be random noise (depending on sample size and other factors), or it could indicate structural and/or bias fouls. Possibly all three or more explanations.

Yes, this topic is only up for discussion because of the perception that Rutgers has gotten hosed in multiple conference games. Draw your own conclusions, but there is no debating that Rutgers has the highest total and per game foul disparity in Big East conference play. Not only does is this disparity reflected on the scoreboard, but Rutgers can ill-afford to lead the Big East in fouls when fielding only nine scholarship players this season. This project may or may not be revisited in a few weeks depending on reader interest and whether this phenomenon continues.

One further idea that I didn't explore would be to try to match these numbers to tempo ratings. With how few possessions Rutgers actually sees, this disparity looks even starker.

Update: here's a scatterplot graph I mate comparing foul per game disparity and win differential. There is a correlation here but it is not even close to strong enough to be definitive. 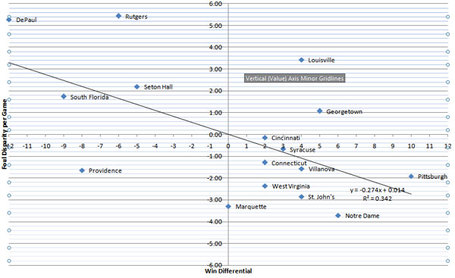