Share All sharing options for: Who owns NYC? Ask Google.

The semi-annual Rutgers/Seton Hall basketball games are always prime opportunities to assess which programs are prevailing in the ongoing quest for metro hoops superiority. One possible way to measure the level of interest in a program is to check which program is generating the most search queries on Google for a specific geographic area (with other wrinkles available, like limiting search queries to a certain time frame).

Here's the specific breakdown for New York state over the past six years.

As Rutgers fans are quick to point out, there is a big difference between the state of New York, and NYC proper or the NYC metro area (more on that shortly). These numbers include all of SU's upstate strongholds like Rochester and Binghamton, which dwarf their presence in NYC. 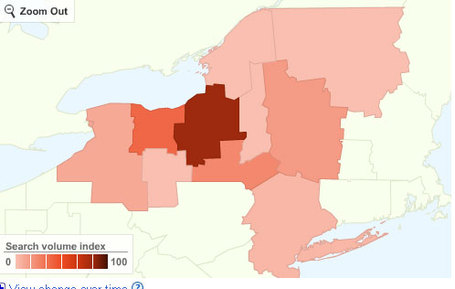 My one concern with this measurement is that there may be a quirk with how Google collects this data. Google doesn't seem to look at capitalization or apostrophes. They do look at periods; however, "st. johns basketball" generates even fewer hits than "st johns basketball". The same issue seems to be coming up for St. Joe's in Philadelphia.

UConn was not included because Storrs is closer to Boston than New York City, even though southwest Connecticut is part of the NYC metro area. They actually come in third ahead of Rutgers in New York state rankings.

Here's the breakdown for New Jersey.

Ah, that's more like it. Although there is far, far too much interest in Duke. That is loathsome and regrettable, surely caused by the ongoing struggles with the local programs. Ideally their bandwagoners will scurry and disperse in short order. New Jersey is split between the New York and Philadelphia metropolitan areas. Rutgers does receive some search traffic in Philly, but not much compared to the local programs.

Unfortunately, Google does not seem to provide a way to only look at the five boroughs of New York City. The two following graphs are for the entire New York City metropolitan area - which includes northern and central New Jersey, NYC, Long Island, southwest Connecticut, and the Hudson Valley.

Something has to be up with those St. John's results. Have they really fallen that far in the metro pecking order? What is clear from Google Insights for Search is that almost all of their search volume comes from NYC proper. Rutgers has a suburban footprint, with traffic centering around its Raritan Valley strongholds in Middlesex and Somerset counties.

Lastly, since the question is undoubtedly on everyone's mind - what about football?

NJ is about what you would expect, with a huge Rutgers advantage. PSU has a big advantage in the entire Philly metro area (i.e., Delaware and PA too) despite being geographically closer to RU.

NY metro is not a big surprise when you think about what a huge percentage New Jersey is of that total.

A quick glance at the data reveals Notre Dame leading through 2005, with Rutgers surging ahead to stay in 2006.

Even with interest falling off, Rutgers remains comfortably ahead. Geography apparently wins out here over years of tradition.  Another big season would do wonders to pump those numbers back up. Critics would probably counter that using this metric is flawed because the web skews young, but that's just it then: this is where the demographic data is headed. How many Notre Dame fans are there under 40? Isn't the rust belt still losing population?