Rutgers-UMDNJ merger back on the table

Share All sharing options for: Rutgers-UMDNJ merger back on the table

Gov. Christie's higher ed task force released its long-anticipated report today. The big press headline is a proposal to merge Rutgers and UMDNJ, with the next step being a second commission to iron out all the details.

"Rutgers needs to be turned from good to great," Christie said. "They have to strategically decide to invest in areas of excellents and eliminate the redundancies across campuses."

The Governor has drastically slashed state funding for higher education (as part of a broader two-decade trend) in efforts to close a gigantic budget deficit, and his task force advocates redressing the cuts. It won't happen overnight, but Christie promises to make this his top budgetary priority if/when the economy recovers (perhaps as further fiscal stimulus). However, even Christie's harshest critics would have to acknowledge that guiding a successful merger would make him Rutgers University's best friend in Trenton since Tom Kean was in office. That would represent a drastic turnaround after his previous fence-sitting.

Rutgers president Richard McCormick has been steadily pushing for a merger over the past year (along with proxies like Ray Lesniak), after showing resistance to previous aborted attempts under the McGreevey and Corzine administrations. Here's his well-reasoned rationale for why this change is so imperative.

Rutgers currently brings to New Jersey more federal research funding than any other university in the state, and more than all of the public colleges and universities combined. The reuniting of Rutgers University and the Robert Wood Johnson Medical School would propel New Jersey’s state university into the top ranks of all American universities in total research funding. Such a union would create a national academic powerhouse that would significantly enhance the quality and profile of New Jersey higher education and would benefit residents across the entire state.

Rutgers ranked 64th in federally financed research and development expenditures in 2009. This ranking is influenced by the absence of a medical school, which could help attract top-flight researchers and research grants to Rutgers. Federal research support at Rutgers increased over 27% between 2008 and 2009, and increased almost 23% between 2009 and 2010. Taking medical-school research out of other schools’ totals would place Rutgers higher in the national rankings.

McCormick, always an academic, understandably has to be diplomatic in navigating a complex situation rife with political patronage fiefdoms. In this instance I'm more comfortable in emulating New Jersey's "Governor Youtube", and demand action. Leaving the Newark and Camden campuses aside, separating UMDNJ-New Brunswick from Rutgers-New Brunswick was inexplicable from day one. The split hurt the academic prestige of both institutions, spawned a needless additional layer of bureaucracy, and created additional institutional barriers preventing more efficient resource sharing. For God's sake, the two New Brunswick campuses are almost territorially continuous. 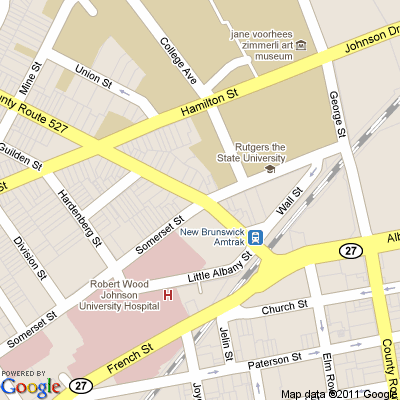 Across the Raritan in Piscataway they don't even bother with such pretenses, with UMDNJ facilities directly located on RU's Busch campus. 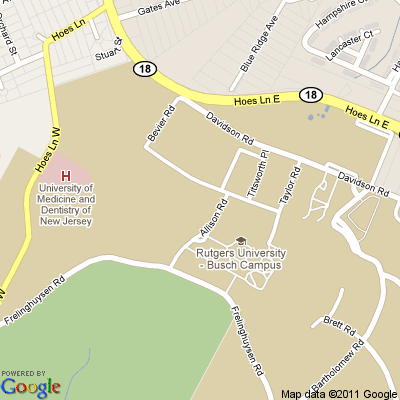 Almost a year ago I thought it was very odd when Christie's transitional education committee didn't even mention the topic of a RU/UMDNJ merger, which it seemed to be the 800-lb gorilla in the room that ought to dominate any and all discussion on the topic. There are reasons of course why a proposal that seemed so intuitive and sensical would stall out for years

Back in 2002, Gov. McGreevey infamously proposed to merge the three Rutgers campuses, NJIT in Newark, and all UMDNJ facilities into one goliath University of New Jersey. The plan ultimately collapsed because of the daunting price tag, political infighting, and other logistical worries. The other UMDNJ campuses have their own problems too.

Anyway, here are a few selected verbatim quotes. There's some Newark/Camden themed recommendations (including the 2003 split proposal) in there that I don't really care about at all as New Brunswick chauvinist. A lot of these are reiterated in the big Rutgers section about halfway through, which really harps on the need to admit more out of state students and to spend a lot on upgrading campus infrastructure.

If the State demands more from Rutgers, it is only right that Rutgers demand more from the State. State appropriations to Rutgers must stabilize, and then be increased, in both operating appropriations and
capital support. The best researchers and students demand the best facilities and equipment, and the State should help Rutgers build and buy what it needs to attract the best talent.

To establish a first-class comprehensive university-based health science center in New Jersey, Robert Wood Johnson Medical School and the School of Public Health should be merged with Rutgers University’s New Brunswick-Piscataway campuses. When Robert Wood Johnson Medical School merges with Rutgers, concurrent steps must be taken to address the other important operations of UMDNJ, including University Hospital, New Jersey Medical School, the future of medical education in Newark, and medical education in
South Jersey.

Tuition
1.  The governor and legislature should not impose tuition caps on Rutgers and the other senior public colleges and universities.
2.  To help mitigate tuition increases, the State should fund increases in salaries negotiated at the 12 senior public colleges and universities at least at the same level as any increases in salaries negotiated with State employees.
3.  Institutions should not increase tuition in one-year increments that are unreasonably large compared to past years’ increases.

Rutgers—The State University of New Jersey
1.  Rutgers should strategically choose to invest in areas of excellence, and eliminate redundancy across its campuses.
2.  The State should stabilize, and enhance when fiscally possible, its financial support to Rutgers. Specific steps toward increased appropriations and capital support are discussed in more detail in the section on Financing/Affordability.
3.  Rutgers should prepare to merge with the University of Medicine and Dentistry’s Robert Wood Johnson Medical School and School of Public Health to establish a first-class comprehensive university-based health science center.
4.  Rutgers must place undergraduate education in the context of its other important responsibilities.
5.  The president of Rutgers should at times act as the spokesperson for higher education in New Jersey.
6.  As New Jersey’s land-grant institution, with a tradition of contributing to the state’s economic development, Rutgers must work more closely with the state’s business community.
7.  Rutgers should increase the resources it provides to Rutgers-Newark.
8.  Rutgers-Camden must receive appropriate support to contribute to Rutgers’ statewide mission.
9.  Rutgers must continue to have strong, independent institutional governance. Its complicated governing structure, however, should be reviewed and streamlined if possible, with due respect to the principles of the 1956 Compact.

UMDNJ and Medical Education in New Jersey
1.  The University of Medicine and Dentistry of New Jersey should be fundamentally transformed while sustaining the integrity of medical education and healthcare delivery in Newark.
2.  Robert Wood Johnson Medical School and the School of Public Health should be merged with Rutgers University’s New Brunswick-Piscataway campuses to establish a first-class comprehensive university-based health science center.
3.  When Robert Wood Johnson Medical School merges with Rutgers, concurrent steps must be taken to address the other operations of UMDNJ, including University Hospital, New Jersey Medical School, the future of medical education in Newark, and medical education in South Jersey.
4.  An expert panel should be convened as soon as possible to implement these recommendations from concept to action, and to consider possible next steps or options expressed to the Task Force. These include a proposal from the Vagelos Commission to merge senior public higher education institutions in Newark, and a proposal to merge senior public higher education institutions in South Jersey. Immediate resolution is imperative.

Among the nine state colleges and universities, vestiges of centralized control have kept autonomy from being fully realized. For example, the governor is the employer of record of the state colleges’ employees, meaning the governor—not the institutions themselves—conducts negotiations with collective bargaining units. A significant proportion of the state college workforce is also covered by civil service, in contrast to the public research institutions and the county colleges, where there is no civil service. New Jersey’s state colleges and universities are national anomalies by having both collective bargaining and civil service rules regulating their workforce.

Several State policies hinder the ability of New Jersey’s colleges and universities to compete with institutions in other states and in other countries for the best students and faculty. Other policies keep the institutions from operating as efficiently as possible. These policies include:

There is a persistent myth asserting that New Jersey’s colleges and universities are needlessly duplicating programs. The Task Force looked for evidence proving these accusations, but uncovered little evidence to support this claim.

Closer scrutiny reveals that the institutions are behaving rationally and responsibly, and are often reacting to student needs and market forces. For example, Rutgers University has a business school in Newark, and it is constructing a new $85 million business school on the Livingston Campus in Piscataway. This new facility will anchor the redevelopment and future academic growth of the Livingston Campus. Plans for a new building will accommodate the large demand for the school’s newly offered four-year undergraduate program for Rutgers-New Brunswick students. For fall 2008, 11,000 applications were 38 received for 300 seats from prospective first-year students—the first time admission was open to that group in New Brunswick. Over the next five years, the school plans to grow to an enrollment of about 3,200 undergraduates on the New Brunswick campus.

After years of neglect, New Jersey needs to help build academic facilities for a 21st-century education at our colleges and universities, protect existing resources, and take the burden for financing these projects off the backs of students. New Jersey’s colleges and universities identified $5.8 billion in facilities needs in 2005, an amount that has grown over the past five years. Issuing general-obligation bonds is an appropriate solution for our colleges’ and universities’ serious infrastructure needs, including both new construction and deferred maintenance of existing facilities.

One bond, targeted in scope and issued as soon as possible, should support a permanent revolving fund for Rutgers, the other senior public colleges and universities, and the independent institutions. Modeled after the county colleges’ Chapter 12 program, this proposed initiative would require the institutions to match 100% of the State commitment. The principal amounts that mature in any year would be available to be issued in any
subsequent year, allowing the program to recycle.