Residents of historic River Road in Piscataway recently received notice that the roadway will be widened and improved between Hoes Lane West and Sutphen Road, a distance of 1,000 feet. A review of the township map clearly shows this stretch of roadway as a direct route from Rutgers University's lots used for game day parking and the football stadium.

I take the shuttle to games, so I'm not too familiar with gameday traffic patterns. Considering that most of the lots are on either side of Sutphen going deeper into campus, is that assertion really correct? River Road is definitely a parking lot on game days, but if the township really wanted to carry water for Rutgers football, wouldn't they also be widening the area from Sutphen to Rt. 18?

Actually, River Road usually has bad traffic on a daily basis. There's a ton going on in the area (Rt. 18, 287, 28, Rutgers, lots of office parks, and everything on the other side of the Raritan River).

Anyway, I went to Google maps to double check all of this, and noticed that their Satellite view function has recently updated its overhead view of the area to include the newly-expanded Rutgers Stadium. In fact, looking at the turf, this must have been taken fairly recently. If you zoom in on Google maps you can actually see what looks like someone carrying a long hose onto the field. 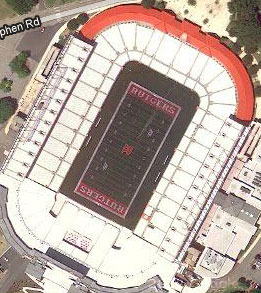 Here's something really cool that I stumbled into after that on a whim. If you have Google Earth installed, go to the stadium and zoom in very closely to see a fun easter egg. I don't want to spoil the surprise (some people have mentioned not getting it), but look around for a moment and you should get it.