Share All sharing options for: Rutgers Day 2010 in photos

Everyone in New Jersey was invited to the Rutgers campus on Saturday - that is, except for the goats. That would have been fitting for the atmosphere, although I can't speak to the health hazards involved. Official estimates had 75,000 visitors in attendance, a 50% jump from the inaugural event held the year before. I believe it - the Folk Festival and Ag Field Day on Cook/Douglas were packed.

I missed last year, so this was my first Rutgers Day, and actually my first Folk Festival/Ag Field Day too, as I had never gone to either while a student. There was more than a healthy crowd on the Cook/Douglass campus (which is on the other side of New Brunswick from the main College Avenue campus for those who aren't familiar with the Rutgers layout). 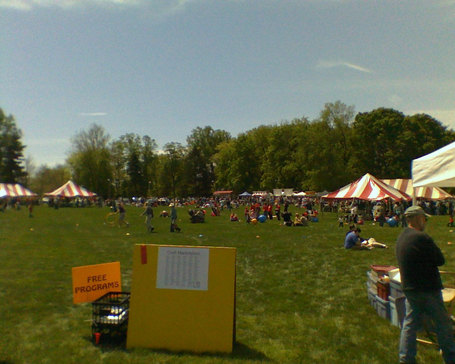 Most of those tents had the standard Rutgersfest/Middlesex County Fair vendor fare. Meaning, it was both good, and crazy overpriced. 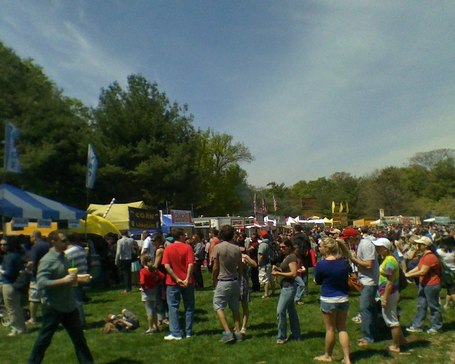 Yes, I came to gawk at everything, and not to listen to folk music. There were hundreds of exhibits around, from the educational to pure performance art (i.e., Roman Gladiators dueling outside of Brower Commons, dance troupes, historical re-enactors at Old Queens). 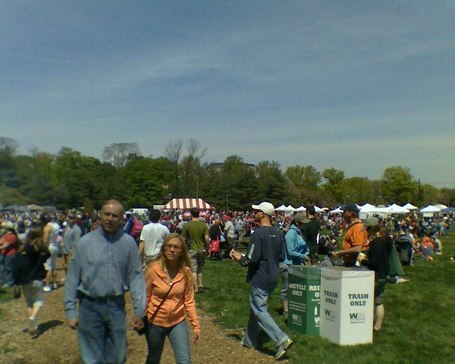 For me the event was really a showcase for the beautiful Douglass scenery (with the notable exception of the parking garage and Hickman, which are gigantic eyesores). It really can stand up to anywhere, which is something I didn't really pick up on as an undergraduate who looked for any excuse to never leave College Avenue. The Wood Lawn mansion does look better without a crowd though. 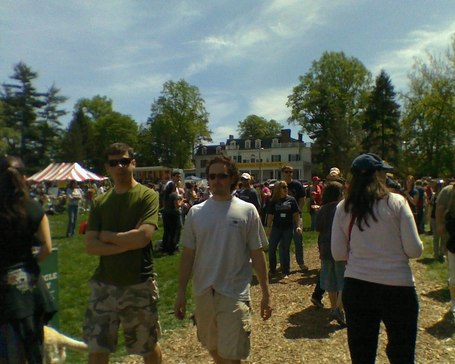 Yes America, there is vegetation in New Jersey. 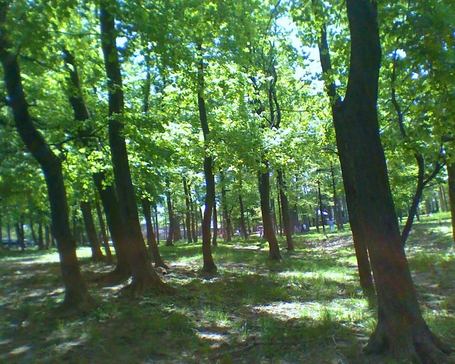 With the weather the Passion Puddle actually looked even better than this in person. The photo doesn't do it justice. 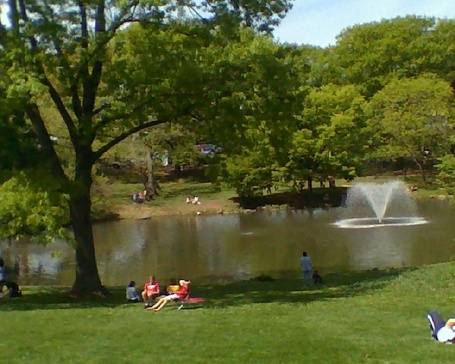 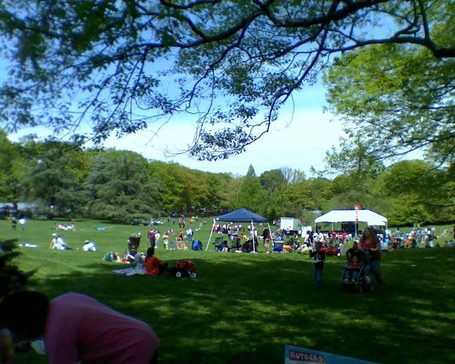 I had to cut my trip short soon after this point. The farm animals would have to go, not just because time was at a premium, but there was a GIGANTIC crowd. I was stunned, considering that Ag Field Day and the Folk Festival had already seemed packed. This picture isn't at the best angle to capture that aspect, but whatever. 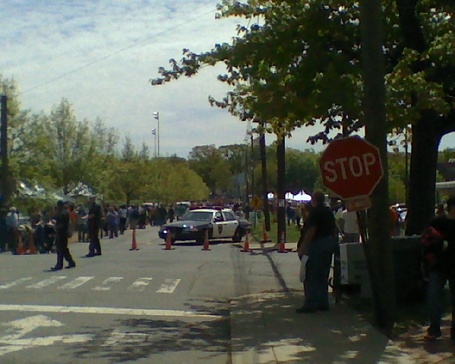 On the way to College Avenue, you couldn't miss the cockroach races and insect petting tent. 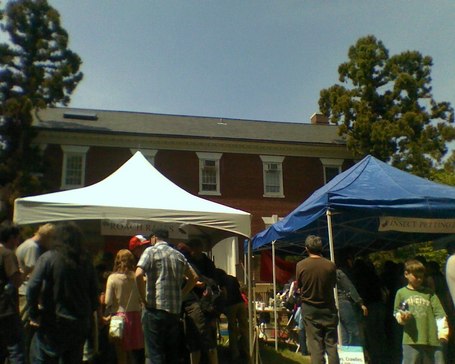 Here's a random picture of gentrified downtown New Brunswick. Off topic, but did everyone hear about the plans to FINALLY build a supermarket on 27? Now, eminent domain abuse is positively evil. I am a giant hypocrite on this topic though, as anyone looking for fresh produce in town is limited to the co-op (which is fine, but small), C-Town (ughhh), or driving to Somerset/Highland Park/Piscataway/etc... A word of advice to our evil DEVCO overlords: after spending some time at Penn, I can pretty much guarantee that a Fresh Grocer in New Brunswick would make a killing among the college crowd here. Make it happen. 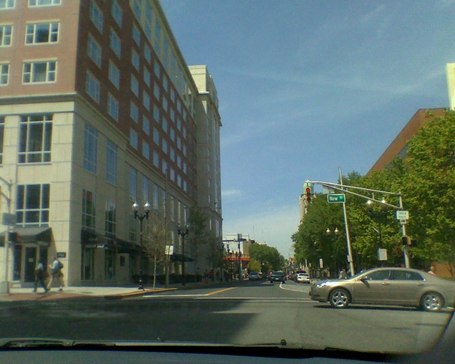 Willie the Silent stares over Voorhees Mall. Once again, my poor choice of angle fails to capture the scale of the area. 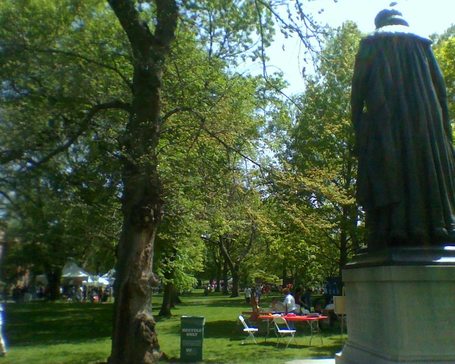 My pictures from inside the Zimmerli and of Old Queens were even worse. 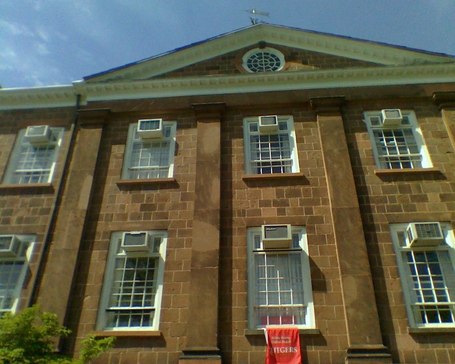 The CAC events were overall kinda meh, and definitely took a back seat to D/C. Seemed oriented towards the family crowd, and I'm not at all in the demographic. It's a smart choice though towards the overall goal of brainwashing, er, selling the larger New Jersey community on Rutgers. It certainly worked for Maryland, where RU cribbed the whole idea from.

You know, Sean from Troy Nunes Is an Absolute Magician and Kevin from The UConn Blog are from New Jersey. No offense guys, but Rutgers kind of designed a whole event so your kind would be erased entirely from future generations. Take it as a compliment! 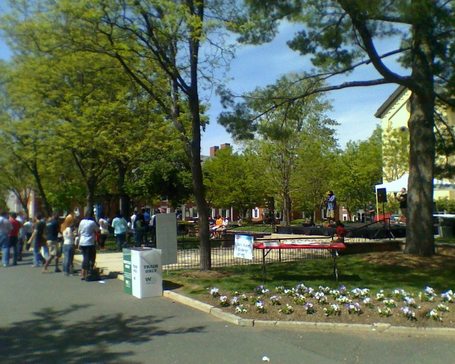 Time was really running short at this time, and the bus setup and spring game traffic did no favors. I eschewed Livingston entirely (although I did want to see the future campus plans in person), and didn't go to anything on Busch outside of the spring game. What'd I miss, anyway? 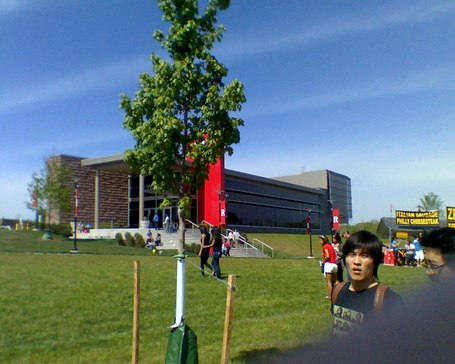 After all of this, your tardy protagonist finally made it to Rutgers Stadium. 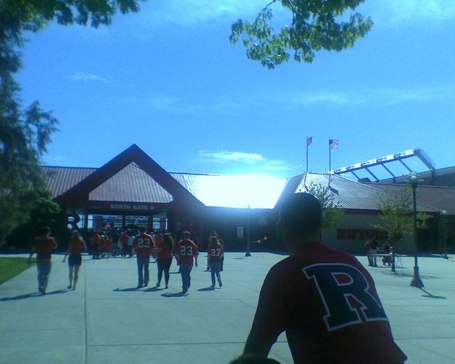 It which point my 2-year old camera phone ran out of memory, and started taking low-resolution pictures. Nuts.

I did swing by Livingston on the trip back. While the new student center looks nice after the renovations, it only exacerbates how bad all the Camp Kilmer-era buildings look. The business school expansion cannot come soon enough.

I wanted to cap everything off by hitting Stuff Yer Face on Easton, but there were no free tables in sight.. Also saw the new NJ Books building, and noticed that the West End is el-gonezo. So that's where the story ends, but you can find a much better collection in terms of quantity and quality at the rutgersalumni flickr account.