Rutgers cannot pass protect at all

Share All sharing options for: Rutgers cannot pass protect at all

Mediocrity would be one thing. When the Rutgers offense gives up nine sacks in one afternoon (technically eight, because one didn't count due to a penalty), that result is so profoundly awful that there is no possible conclusion other than something is drastically out of whack. Indeed, Rutgers lost Desmond Stapleton, its best lineman, to an injury in the first half, and surrendered most of the sacks in the second half. That loss is undoubtedly part of the equation, but I wanted to individually look at each of the sacks to get a picture of exactly what is going wrong.

1. This is in no way intended as a representative analysis. Everything that happened on other playds is just as important, and well worth looking at. I will not for time constraints. The sacks are the biggest worry though, because they cost Rutgers eight downs, and 78 total yards of field position.

2. There's no way to definitively say which blocker has what assignment on any particular play. As subjective guesswork, any if not all of the following could be absolutely wrong. 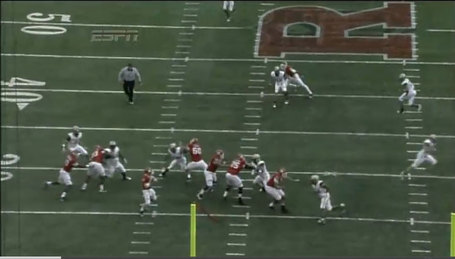 1. The announcers blame Dodd for this one, arguing that he could have gotten rid of the ball faster. That's sort of true, but he could have used a little more time here. Ruch (#60) lost his defender. 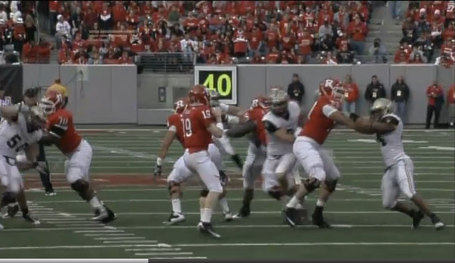 2. This one is as simple as Army rushes seven, and Rutgers is in Shotgun and has only six blockers in. Unfortunately, Sanu was wide open going over the middle. If an offense doesn't audible before a play like this and keep another guy back in protection, then you're gambling on being able to get rid of the ball before the pocket collapses. Dodd has to throw here, whether it's to Sanu or out of bounds. 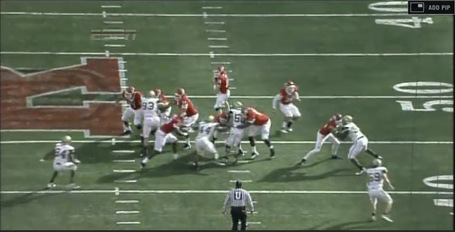 3. D.C. Jefferson can't pick up the right end who had stunted over, and additionally the blitzing corner just charges past Art Forst. 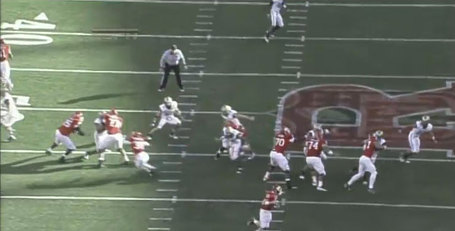 4. Ruiz ultimately lets the sacker McNarry in, and that guy shouldn't be allowed to match up against tight ends. Additionally, Devon Watkis and Howard Barbieri are beaten on this play. However, the sack is Dodd's fault. He had plenty of time to throw the ball away, and held onto it for too long. By the way, on the very next play Mackey comes in on a stunt, and no one picks him up with the right guard helping Forst double team a DE. 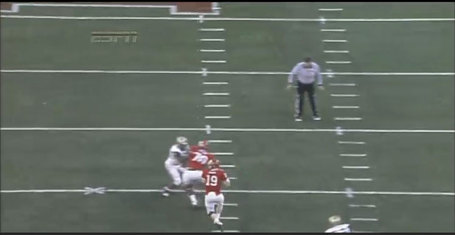 5. Dodd's fault. Wynn was beaten, but Dodd REALLY should have thrown it away and didn't. Fortunately, this ended up being a blatant horse-collar tackle, so I think this was the sack that didn't end up counting. By the way, that Kordell Young conversion right after this was awesome. Throw was high in the face of pressure, but Young makes a great leaping catch. He's turned into a useful dumpoff option. 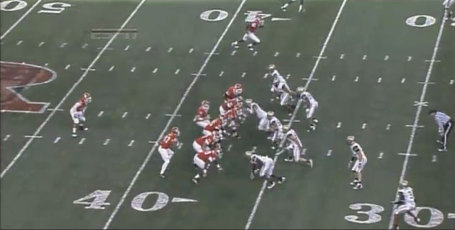 6. See that safety at the top of the screen? He comes in completely unblocked. No one picked him up, and this is particularly egregious because his body language screamed blitz. Dodd has to spot that and audible the protection. This was supposed to be a play action rollout but went for a huge loss instead. While it's nitpicking, Ruiz runs across the backfield and it would have been nice for him to at least chip the blitzer. 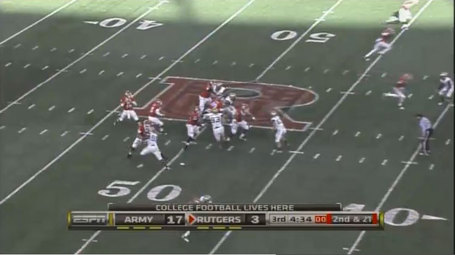 7. Wynn's just beaten. FYI, Watkis lost his guy right after on the Deering catch, but Dodd escaped the pressure that time. 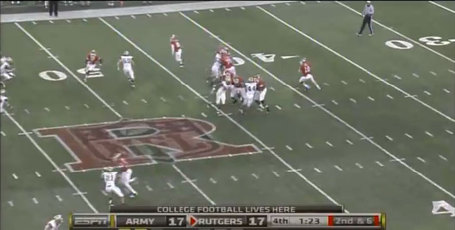 8. This is the same Art Forst play that's happened about twenty times so far this year, where a speed rusher gets a step off the edge and it's over. 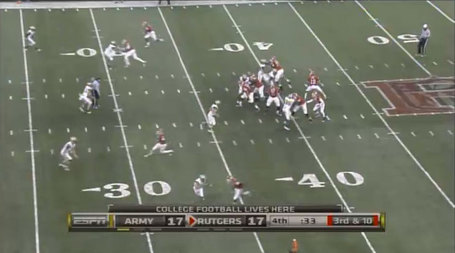 9. Lowery and Barbieri double team one defender, and there's no one left to pick up the other guy from bursting through the resulting gaping hole. This is really the play more than any that cost Rutgers a chance to win the game in regulation.

While watching this game both in person and on the replay, I kept wondering why Rutgers had gotten away from what had seemingly worked so well over the preceeding six quarters. Yeah, Army's coverage downfield is probably awful, but that isn't much comfort when their blitzes kept connecting. All the tricks that make things easy for a young quarterback - screens, slants, play action, quick outs, rollouts; they were in much fewer abundance this week. The offense went back to a lot of the slower-developing deeper stuff that Savage was running earlier in the season, and that is not the right approach with a porous line.

Chas Dodd certainly runs the offense better than Tom Savage at the moment, but today convinced me beyond a shadow of a doubt that Savage was put in an impossible situation with such awful pass protection. No one could reasonably be expected to succeed in that situation. Dodd is crafty, but he showed his inexperience today at times. Things improved in the second half, but a lot of what I saw got my thinking that the quarterback competition isn't as cut and dry as it may seem. Frankly, if this keeps up, it's only a matter of time before Dodd gets hurt and Savage is pressed back into action. Coach Schiano acknowledged as much after the game, deeming the woes an "epidemic."

Unless the protection radically improves, we're going to look back at this game in a few months as the nadir for Kyle Flood. The line can't pass protect, can't run block, and further anchors the offense by committing numerous false starts at home (with an assist from D.C.Jefferson.) There is some stuff to like in the passing game, but Kirk Ciarrocca deserves his share of the blame too for not adapting to available personnel. Deering and Harrison and everybody else have so much raw talent that it is hard to resist wanting to air it out and compile gaudy statistics, but that approach is not feasible right now. As tempting as it will be to pick on Pitt's porous secondary next week (and remember, Romeus is out and Wannstedt doesn't like to blitz), I fear that is going to be all for naught without dialing down the complexity and getting back to basics.