Google is nothing but trouble

Share All sharing options for: Google is nothing but trouble

It's no surprise that yesterday's post is eliciting a mixed response. I was peeved, and my inadvertent surprise turned into being mpulsive. That's clear, and parts of what I said were mean spirited, and I did make some factual errors, which in fact happens quite often. In the end, I still went ahead because what happened is actually a very common violation of internet etiquette.

Just like Mr. Shea, I too am sensitive to criticism. By all means, rake me over the coals if you're so inclined. Some of what's being said is very much on the mark. Former Rutgers A.D. Fred Gruninger, and decades of neglect and mismangement are, in fact, the primary culprits for school athletic programs falling on hard times. One of the ongoing themes of this site has been to recognize that, and try to advocate for learning from those mistakes, and not repeating them in the future. And yes, all of these posts come from behind a wall of anonymity, but I haven't pretended to be a disinterested third party elsewhere.

Now, comments about any alleged creepiness stick a little deeper. As the link above shows, this sort of thing has happened a lot, to many famous public figures. All I did was literally run a few Google searches, and tried to be thorough as to remove any doubt. Any loyal readers of this site know that it's basically a front end user interface for Google. There's a wealth of information out there. Case in point, here's how I was otherwise amusing myself yesterday afternoon.

Recently, I was searching for information, and found something that's about equal parts ironic and sad. 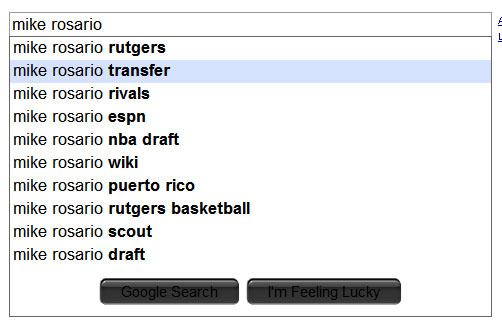 What this means is that if you type some variant of "Mike Rosario" into Google (without quotes), the engine will use its autocomplete feature to guess that anyone googling Rosario is checking into all the speculation that he'll transfer at the end of the season. Being second on the autocomplete list means it's the second most popular search about Rosario, indicating how many people are actually making that association. Here's something if you really want a laugh. Search for any pro athlete on google. The number one autocomplete result is always the same. 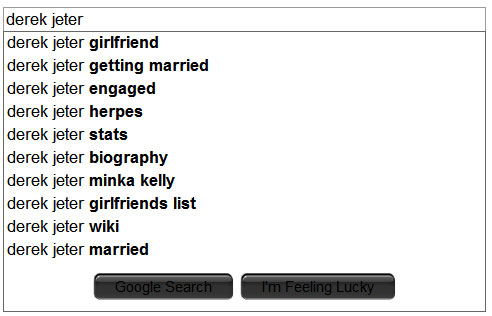 Apparently the world is full of gold diggers, and now we're all voyeurs to their dreams. Go ahead, try it for any pro athlete. The same result nearly always comes up. Is it offensive that these DON'T for Ray Rice and Brian Leonard? The #1 autocomplete for Peyton Manning? Wishful thinking about him getting a divorce.

It's an informative gaze into public sentiment in America, as it's fascinating how these associations spread in the wild. Of course, the #1 query for Joe Theismann is about the one and only Lawrence Taylor breaking his leg. How weird would it be to play around with this for a while and see especially weird, non-sensical things come up? Like, I don't know, you're search for information about someone, and learn strange minutiae that you may not exactly have been looking for, or particularly even want to see.

That opens the door to all sorts of malicious possibilities. The phrase "Google bomb" refers to deliberate attempts to manipulate the search engine's ranking algorithm. It's been used as a tool for political satire, and it's not hard to imagine how someone with too much time on their hands could really try to wreck someone's life, or just spread crude speculation and insults. Which, has led to corresponding services designed to manipulate search enginges in order to generate a list of positive results, and all sorts of resulting ethical navel gazing.