Where the chopper went this year

Share All sharing options for: Where the chopper went this year

Here's a fun byproduct of my cleanup yesterday of what's left of the 2010 offer board. (2011 is coming eventually, but I need to totally revamp it for technical reasons.)

One important note from this year's recruiting class is that RU's efforts in Florida are no longer limited to Dade, Palm Beach, and Broward County. In fact, during last week's presser, Coach Schiano said that Rutgers now recruits all of the state of Florida except for the panhandle region (Tallahassee/FSU, and some really rural parts near the Alabama border). My map of Rutgers offers to Florida prospects this year seems to bear that out. 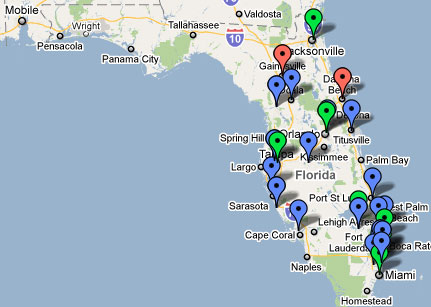 A blue pin denotes one offered prospect in that town, while red means two, and green means three or more. The red pins are on Gainesville and Orlando. Green pins are on (obviously) Miami, Ft. Lauderdale (home of powerhouse St. Thomas Aquinas), Jacksonville, Orlando, Tampa, Pahokee (a bleak sugar town in Palm Beach county that always has a lot of prospects), and Delray Beach. They're another Palm Beach town that seems to produce a lot of DI players. RU's efforts are still centered in the Miami area, but signing three players out of Jacksonville shows a concerted effort to make inroads elsewhere.

Just for completeness, here's a map of offers extended to local prospects within the state of Rutgers (NJ, and parts of NY, PA, CT, and DE). 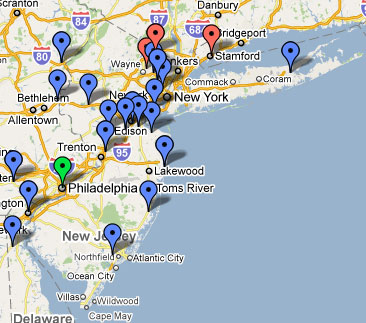 Not a surprise to see New Jersey dominated by regions near the Parkway and Turnpike, as that's where most of the population lives. Now, by all accounts 2010 was a down season, and the coaching staff didn't offer every FBS-caliber local prospect. Still, when you compare this to a map of New Jersey population density, what's truly stunning is that they weren't willing to accept the verbal of any prospect from the Camden/Burlington/Gloucester area, where Rutgers cleaned up a year ago. Luckily, it appears to be back up next year along with the rest of the state, so they should be back with a vengeance.