Share All sharing options for: Dissecting the three sacks allowed

1. It's not always possible to precisely figure out each lineman's assignment(s), especially in zone schemes.

2. Sacks, while a useful indicator of pressure, only give a small picture of the overall pass rush. Sacks are great, but defenses want to disrupt an opponent's rhythm, and force them into throwing the ball far sooner than they would be comfortable with. This is very labor intensive as is. It is not possible for me to go over every play in a game, especially when using the ESPN 360 player, which leaves a lot to be desired. I have to rewatch plays multiple times to even draw these preliminary, crude assessments.

Given the choice between failing to pick up blitzers, or being physically dominated at the line of scrimmage, I'd prefer that any sacks be of the former variety. At least, conceivably, you can work on assignments and the like. Maybe add another protector or two. Players can't exactly get bigger, stronger, and faster over night.

Concidentally or not, all three sacks seemed to come when Rutgers was in a four wide, one back set. Here's a screen grab of the first one. 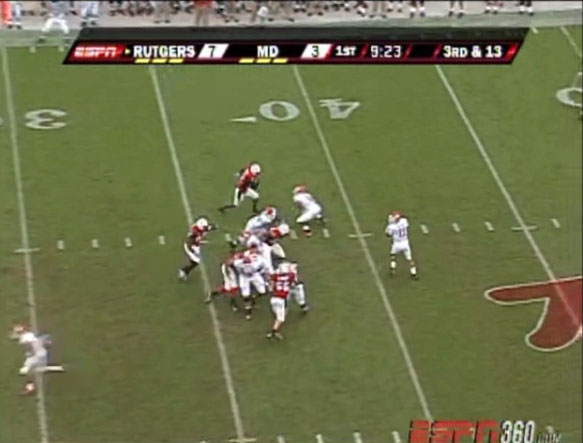 Incidentally, on the play right before this one, the ILB moved up and freaked Haslam out into an exaggerated false start. In this play, Maryland lined up in what looked like a 3-4 to me, and all four LBs were teasing blitz. They brought five overall. The OLB Demetrius Hartsfield lined up inside to the right of the LE, and right before the snap, the LILB charged towards the edge. That LILB is at the top of the screen. Martinek (I think) did a good job on pickup there. I was impressed with Davis working against the RE on the bottom of the screen. Blaze was getting some guard help.

Now, on the absolute top of the line up there, you'll see Hartsfield just darting pass Haslam, who seemed to guess wrong. Here's a better angle of it. 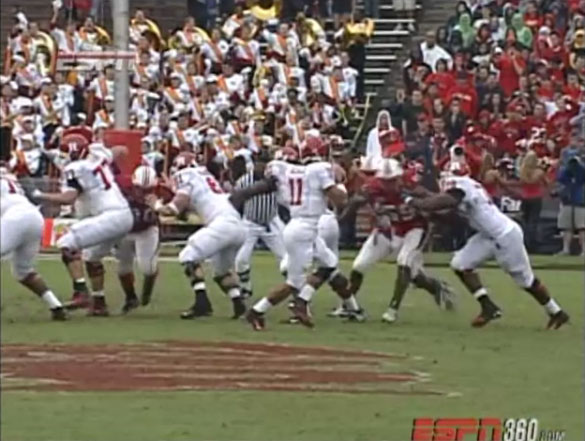 Hartfield forced Natale out of the pocket back to the LOS, where several Maryland rushers disengaged and sacked him. I didn't think Wynn looked great here, but this one was 100% Haslam's fault. 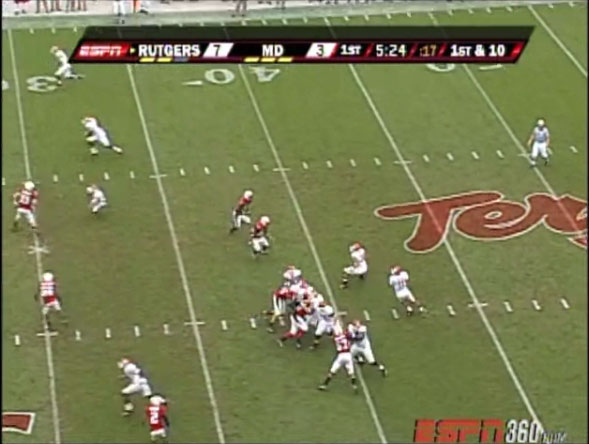 Maryland looked to be in a 3-4 again, and once again brought five. This time, it was the WILL backer and SS coming in from the edge. The problem on this play was that all of our protection slided to the left. With four wideouts (instead of say, a TE staying in), there was a matchup issue right at midfield. Only Martinek is staying back in protection, and he cannot possibly hope to pick up two defenders. We have open receivers streaking downfield, but Maryland gambled that they would be able to get to Natale first, and they were correct. 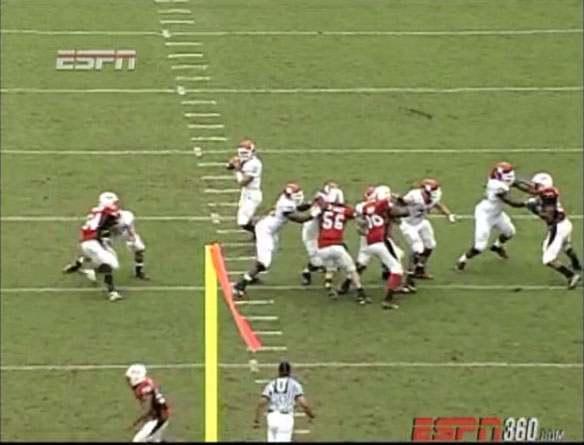 From that angle, you can see the problem. Davis is on an island, and the other OL are engaged in two double teams. Now, here's the question - who's fault/responsibility is it to make sure that Haslam is in a position to pick up the other blitzer? Is it Haslam? Natale and/or the coaching staff? Blaze? Someone guessed wrong. With area blocking, I don't know who it was. Either way, Natale has to see that guy coming and somehow get rid of the football. 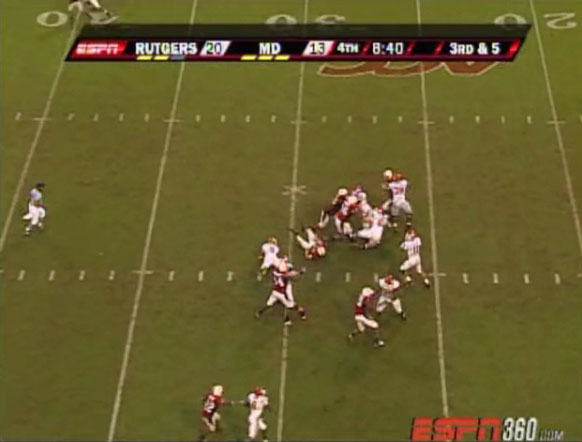 Now, this is arguably the worst of the three. Maryland was in a dime, and brought a linebacker and one corner. See the Knight lineman falling back into the turf? That's Ryan Blaszczyk. From time to time, he will struggle against bigger DTs, and was just mauled by Maryland's massive A.J. Francis on this play. Think of Shaun O'Hara whenever he lines up against a Kris Jenkins, Shaun Rogers, Haloti Ngata, that sort of player. Both O'Hara and Blaze are good centers, but have the same particular set of strengths and weaknesses. 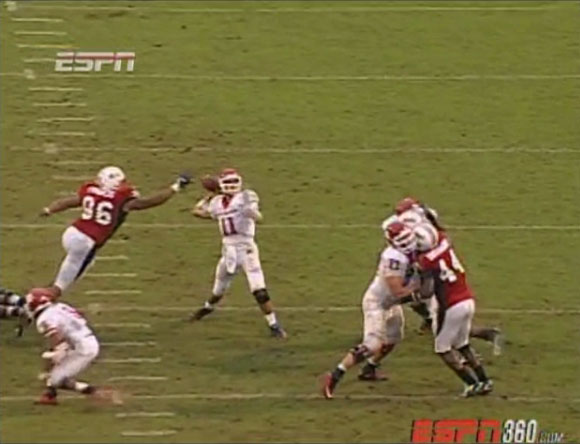 This is still a relatively young group, and they're battling a few injuries too. As last year showed, it could just be a matter of playing with confidence and developing chemistry. Rutgers is currently ranked 103rd in the nation in sacks allowed, at 3 per game. This cannot continue. However, in the Maryland game, I did see several signs for optimism. Considering that the Terps were expecting run on nearly every down, the line did start to show a little more with run blocking, and wore down the Maryland DL over the course of the game. Two of the sacks were allowed early. Natale was hurried at times, but I thought the unit settled down a bit in the second half. Most importantly, the first two sacks had more to do with scheme (4 WR/1 RB formation, and executing proper assignments) than physical dominance. It's not great to see that, but it's correctable. Get to work Mr. Flood.