There's no beating around the bush - the Howard Bison are one of the single worst teams on the FCS level. That's specifically why they were chosen to appear on this year's schedule. There's no upside in playing FCS teams to begin with, so it's best go with a MEAC doormat, not a CAA power. Texas Southern is at a comparable level of futility. Rutgers is no longer at a point where they'd have to worry about those kind of upsets, but they were so damaging in the early days of Schiano's tenure that the athletic department no longer wants to assume a modicum of unnecessary risk, and understandably so. I'm not pleased with their scheduling policies in general (yeesh, Army in 2016 now?), but it's hard to criticize them too much for that decision. If you're determined to play a cupcake, slather on the frosting.

As such, yesterday's contest was nothing more than a glorified scrimmage, on short rest. It gave the team an opportunity to work on a few things, iron out some wrinkles, and hopefully escape with nothing more than minor injuries.

The attendance was announced at 43,722, and may not have been that. Lots of empty seats in the end zones and upper deck. At least the students showed up though. The number should serve as a stern lesson to the athletic department that there's limited appeal to watching this sort of game. The numbers may not always work out, but I would rather go on the road for a one-off payday against a top opponent. There was always a risk of a disappointing crowd yesterday if the team laid an egg against Cincinnati, and the poor weather didn't help. It'll be interesting to see where things are for FIU. They're not a marquee opponent, but at least have a pulse. A good showing at Maryland would help with bringing the numbers back up. 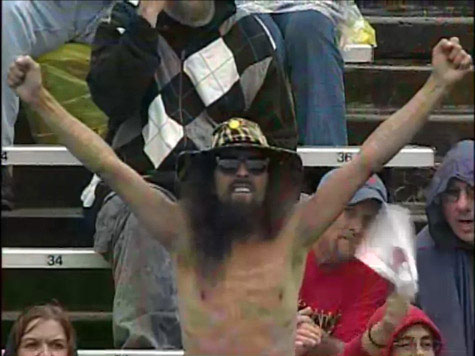 This, this is what happens when you don't show up for games.

A 14/44 pass/run split is probably what Coach Schiano would have liked to have done against Cincinnati. I like the idea of getting Jourdan Brooks involved early. Use him as a battering ram to tire down opposing defenses, and let loose fresh legs in the second half. That factor arguably helped Martinek a lot last year. It was the Rocket Williams show in the fourth quarter, which was a nice little treat for everyone in the stands. Good showing by all of them. Hey, Jack Corcoran actually had a catch this week too! 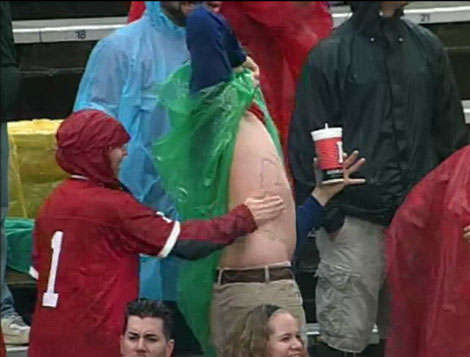 Watching this sequence on the replay was just plain bizarre.

Considering that people were ticked off about Mike Teel struggling against Howard three years ago, no one can really complain about 223 yards and 2 touchdowns from Tom Savage in his first ever collegiate start. In fact, he just seems to have "it". RU used more of a traditional look on offense (no Jabu option in sight), working in the Shotgun about a fourth to a third of the time We'll have to see how Savage looks against top pass rushes, but I'm just amazed at his body language in the pocket. The kid is more accurate than advertised, and despite a few overthrews against Howard, already has more touch on his passes than Mike Teel. Savage is no Jefferson as an athlete, but if you squint really hard, you can almost imagine John Elway out there for a second. How great is it to have a pocket QB with some mobility in his back pocket? 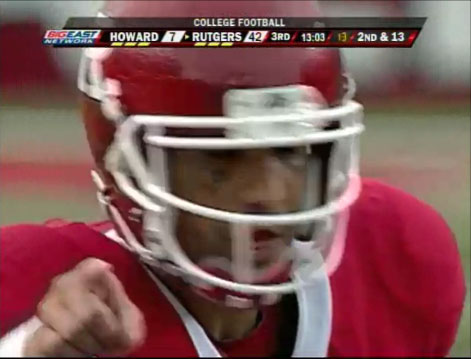 I thought the defense looked ok. People are nitpicking there a bit because they're still on the edge after Cincy. Gotta get better on that side though, and fast. O.L. was better too, although there was a bit of lineup shuffling at times. Maryland has struggled badly in the trenches over the first two games, so that area will need to get settled in a hurry. Nice to see Zaire Kitchen suit up again.

D.C. Jefferson also got the start at TE. Wow; Rutgers is frighteningly young this year. Mohamed Sanu and Savage are great, and Jefferson moves impossibly well for someone that size, but it's playing with fire. Interesting to see a few freshmen like Harmon (clearly needed for the future), Glaud (heir apparent to D'Imperio) and Harrison (physical star moving up on the depth chart with Robinson's injury) see time. It might be time to start working in Ryan more too in nickel and dime packages. Maybe one of Civil or Larrow, but those DL redshirts are worth their weight in gold.

And how about that Sanu? Maybe he does have a little Britt in him. We saw this again.

I don't really have an issue with the Shamar Graves two point conversion either. This game was nothing more than a glorified scrimmage. Hence, it's find to play around with a couple things that you might want to get a look at. Howard knew exactly what they were getting into for collecting their paycheck. Rutgers scored 42 points in the first half, and 3 in the second (with Williams getting a ton of carries after halftime), so it's not like they were running up the score against a clearly feeble opponent.

I caught the replay, and then double checked a couple things on ESPN 360. Which, by the way, is a big help, although kind of buggy at times. Couple things I caught: a Howard coach (presumably) screaming "Hey, you gotta cut that shit out!" when one of their DBs pushed Sanu out of the end zone. A loud "Oh, shit!" that was either late in the second, or early in the third quarter (forgot the context already though). And for some reason, Coach Schiano going completely beserk into his headset after Silvestro and Munoz (I think) made a pretty nice stop. 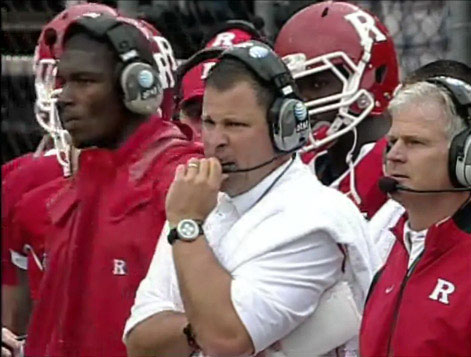 It is what it is. Nothing more or less. Rutgers paid hundreds of thousands of dollars to bring the Howard band to campus, and this game was thrown in free of charge.