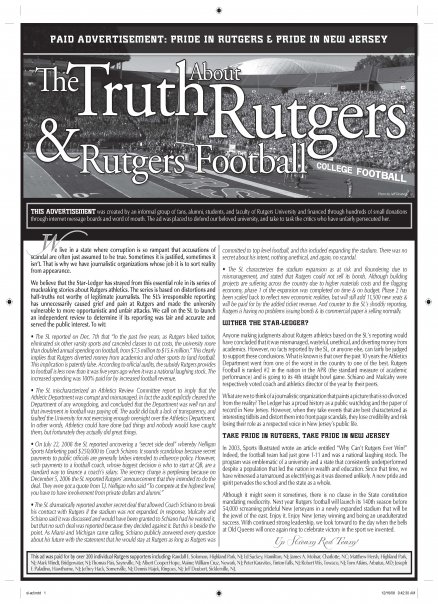 This ad (click for full PDF, click here for full size jpg) was published in the Newark Star-Ledger today. Several Rutgers fans paid for an ad to respond to the ongoing series of articles published by Josh Margolin and Ted Sherman.

I was a little skeptical of this effort, but that's very well done. The only arguable flaw is that there is no mention of George Zoffinger. While it is almost certain that he is the source of the initial leaks (as part of his campaign to sack Bob Mulcahy), those allegations have never been confirmed. Including them in the ad may have bogged down the message.

According to the popular Rutgers message board on Rivals, the people behind the ad paid for a placing in the front section, but it was buried in the back of the individual county sections. If there's any justice in the world, the blowback from that will further damage the Ledger's already tarnished reputation.